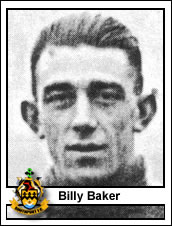 The man who eventually irrevocably displaced 'Salty' Halsall starred in Southport's great Cup run in 1930-31 until he was unnerved by Dixie Dean & Co. at Goodison in the 6th Round. A daring goalkeeper, this ex-pit worker was described by a critic as being 'a sure, clean fielder, with a fine eye for timing'. He also had a reputation for saving penalties — five successive penalty takers (not six as has been claimed) failed when facing him during a 3-month period in 1930-31. He lost his place to the brilliance of Matt Middleton after conceding 7 goals at Lincoln. After being freed at the end of 1931-32 he won a Third Division South Championship medal with Brentford where he was an ever-present in 1932-33 and registered a further 23 appearances the following campaign. He then had a single season at both Northampton Town (13 apps) and Rochdale (38 apps). Billy retired from football when his father died and returned home. Latterly golf claimed his attention and he held every position of office at nearby Castle Eden Golf Club.