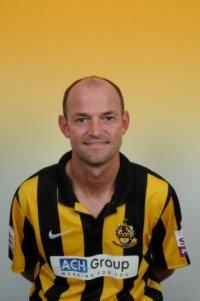 Milligan started his career in 1997 as a trainee at Everton F.C. He never started a match, but had four league appearances as a substitute before he left on 21 March 2001 for Blackpool F.C. At Blackpool he stayed until August 2003, scoring one goal against Stockport in 29 league games and once in the Football League Trophy against Scunthorpe. He fractured a foot in training in November 2002, an injury which kept him out for five months. Steve McMahon, the then Blackpool manager, released him at the end of the 2002-03 season.
On 5 August 2003 he signed for Macclesfield Town, but he moved only a month later to Leigh RMI. He then played for Hyde United, who loaned him to Fleetwood in August 2004 after he had recovered from an injury to a cruciate ligament of the knne. Toward the end of the 2004-05 season Milligan made eight appearances for Blackpool's reserve team, hoping to move there. However, in May 2005 Blackpool manager Colin Hendry declined to offer him a contract.
Milligan moved to Fleetwood Town in 2006 and is their club captain. He was their leading scorer in the 2007–08 season with 21 goals. The club won promotion to the Conference North as champions of the Northern Premier League Premier Division, and Milligan was named both the fans' Player of the Season and the players' Player of the Season. On 23 May 2008 he signed a new three-year contract at the club. In 2008 he was voted as the Premier Division Player of the Year and was presented with the Peter Swales Memorial Trophy after Fleetwood's match against Bradford Park Avenue F.C.
On 25 June 2013, Milligan signed for Southport. Named club captain by manager Alan Wright Milligan was an integral part of his side. Following a run of bad form Wright was dismissed from his post shortly before Christmas with John Coleman taking over the Haig Avenue hotseat. With an overhaul of the playing squad inevitable Milligan found his chances limited and he left the club on 28th January 2014.