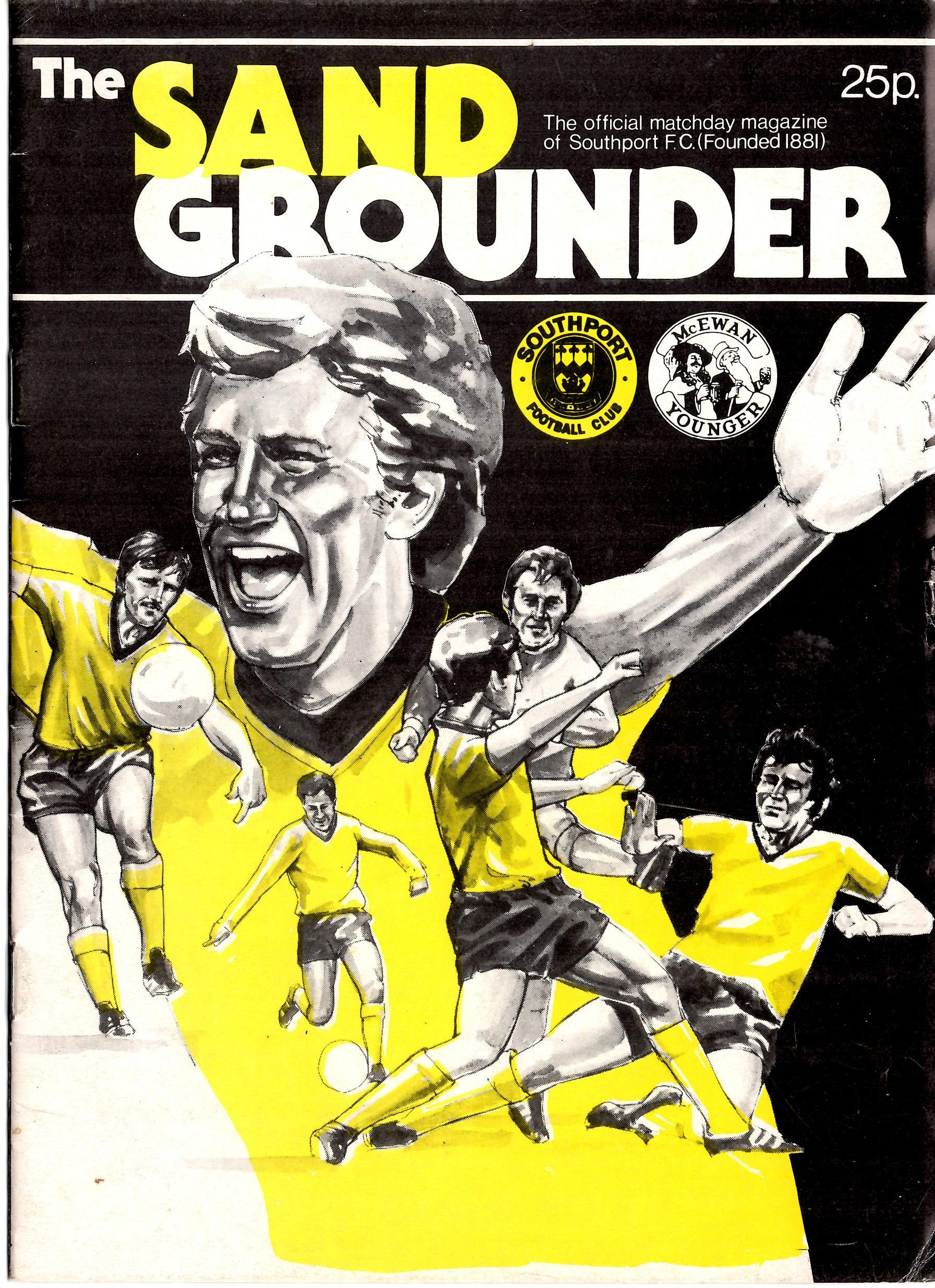 The following article is reproduced verbatim from the Sandgrounder matchday programme on 26th December 1985 for the match against South Liverpool. It was a season in which the Sandgrounders had started remarkably well, setting a ‘record’ of 10 consecutive wins – 7 League, 2 FA Trophy and 1 NPL Cup. Not only is its content interesting and worthy of inclusion on its own merit but i’ve really chosen to include it here because it includes a playful ‘dig’ between two friends in Michael and Geoff over the selective inclusion of games when producing statistics.
Geoff had a very set way of thinking when it came to what constituted “first class” matches, borne from his love of Cricket statistics. We all accepted and understood his classification, and his tendency to omit pre-football league matches from his statistics but i’m not sure Michael or myself ever really agreed with it. Where I, on one hand, would get excited when i would discover a rogue friendly buried in an old newspaper, Geoff on the other hand didn’t give two hoots as it wasn’t competitive.
This playful ‘dig’ at our old friend simply made me smile. I’m sure it would make Geoff smile today too, if for no other reason than to get people talking about statistics….he’d still insist we’re all wrong though! Rob (a self confessed non-league era statistician) and myself (strictly whole picture) regularly have similar conversations. Rob’s advantage is that the non-league era is definitive….where he can point to a run being a ‘record’ he can say with some certainty that he is right, the non-league era for a start is all within living memory for many of our supporters. I on the other hand can not ever claim to be 100% correct if I look at our whole history as a basis to form a statistic as we have not yet detailed every single game ever played – I long for the day where I can. What I can say however is that through this website we now have the most complete, published, list of Southport matches ever made available, anywhere…and we’re still adding to it!
D.H.

Much has been written about Southport’s magnificent run, and if one were to believe some sections of the local and national press, not to mention certain Southport Football Club statisticians ( sorry Geoff ) one would think that the recent good run was an all time record.

Just as when I was a schoolboy I always believed that history began at 1066, so seemingly records dated before 1921 are treated as before the start of Southport Football Club’s history.

The run ended on 1st December 1903 in the fifth qualifying round of the F.A. Cup when Darwen won 4-1 at Scarisbrick New Road.

The most exciting game of the series came on 3rd November 1903 when 300 Southport supporters travelled to Accrington on a special train for the F.A. Cup tie which Central won 1-0, Ben Rickerby scoring the all important goal. There was intense excitement throughout the match owing to the bombardment of the Southport goal, and Stephen Danhay of Anchor Street, one of the oldest Oystermen in the town, had a seizure and was removed to a neighbouring cottage. He was later conveyed back to Southport and died the same night. During his only interval of consciousness he murmured “Did they score?”

The most unusual incident during the spell took place on 17th October 1903 in the game against Stockport County when the referee, Mr McQueen blew the whistle for full time seven minutes early. The majority of spectators left the ground, but others ran or to the field to explain the position to the referee who at once recognised and admitted that he had made a mistake. As all the players had left the field the referee brought them back and played a further 7 minutes, but there was no more scoring and Southport won 1-0.

Southport Central went on to win the Championship by one point from Earlstown, and in a challenge match against Everton Reserves, champions of the ‘A’ Division, they drew 1-1 at Goodison Park.

In the Lancashire Senior Cup Central reached the final, overcoming Bury (the holders) 6-1, St Helens Town 1-0 and Preston North End 3-2, losing 2-0 to Blackburn Rovers in the final at Deepdale,