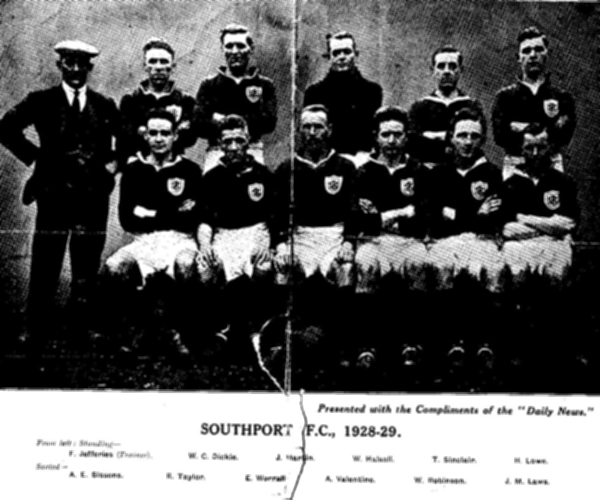 Prior to the start of the campaign the ground was redrained and levelled at the Scarisbrick New Road end where there had been a noticeable dip. The old scratching
shed, which had been blown down by gales the previous February, was replaced by the stand on the popular side. Three hundred ‘ons of material was used to lay
the foundations of the structure and all the work was completed by a voluntary band of helpers. The finance was raised by Special Committee consisting of directors
and members of the Subscribers’ and Supporters’ Clubs under the charmanship of director Mr. Ray Hall.

In the League, the ‘Port finished in twelfth position. The feature was a fine unbeaten run of eight games which followed immediately on a 6-0 defeat at Chesterfield on Boxing Day and lasted until the visit of Wrexham at the end of February.

Harry Beadles, whose 18 goals in the League made his total 61 in £2 League games, found a scoring partner in Albert Valentine, who netted on his senior debut
against Doncaster hovers on New Year’s Day, and four days later followed up with a ‘hat-trick against South Shields. His 17 goals in twenty League games—nine
came in his first six appearances—soon had the scouts flocking to Haig Avenue and it was no surprise when Cardiff City snapped him up in July. Actually, Valentine
never fulfilled- h.:3 early promise. moving on later to Wigan Borough. Crewe, Chester and Macclesfield Town.

The season was of a transitional nature for Southport, as Secretary-Manager Charles Parker left in January. 1929. to take over at Manchester Central. During his spell in office he had paid particular attention to the financial side and had made every effort to make ends meet by transferring White, Tait and Marshall. More
important, his appointment of a scout in the north-east paid handsome dividends in the following years. He was succeeded in March by J. J. Cummins.

At the end of the season Jimmy Cummins had a general “clear-out,” with the result that right-back Edwin Worrell left for Shirebrook. whilst centre-half
Jack Martin went to Macclesfield, although he did rejoin the club briefly in 1980. Of the forwards, Albert Sissons, signed twelve months earlier hem Leeds United.
departed to Northampton Town, veteran ‘Harry Beadles—top scorer for the third consecutive season—joined Dundalk. centre-forward Robert ‘Taylor,
formerly with Middlesbrough, went to Connah’ss Quay, and Joe Laws transferred to Macclesfield. Laws, who stood exactly five feet, had been the regular outside-left
for two yeas and was nicknamed the “Mighty Atom” by the crowd, with whom he was a great favourite.

After two years of Cup successes, Southport’s luck ran out. Although Annfield Plain were easily accounted for. Stockport County proved too strong at Edgeley Park and won comfortably.

By and large, this was a disappointing year; the club lost almost £2,000, with expenses amounting to £200 per week and average income only £143. Too many of the close season signings had failed to come up to expectations. Clearly Jimmy Cummins had a lot of hard work ahead.