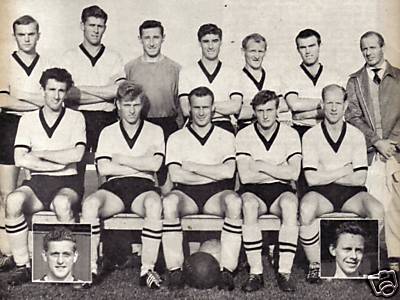 After suffering, and only just surviving, the indignity of a third successive re-election application, Southport firmly resolved to improve their performance. Wally Fielding built up an attractive team – blending youth and experience — but left before the season commenced to become assistant-trainer at Luton Town. Lem Newcomb took over as team manager; Lem had been a most cultured wing-half before the war and more recently had coached the “A” team in an honorary capacity.

Southport made their best start in 29 years, winning their first two games, and soon established a reputation for consistently good football. Only 18 players appeared in league matches – the fewest ever called on by Southport in a full season. In October, Peter Harrison netted 30 seconds from time to secure a thrilling 4-3 win at league-leaders Peterborough United. In December, Southport’s massive 5-1 win at Hartlepools equalled their then biggest away win,. The subsequent return game with Peterborough provided a superb exhibition of football. Although Harrison missed a penalty, Southport led 3-1 with seven minutes left: then, unsettled by a Bentham own goal, they allowed the ‘Posh to equalise, thus failing to become the only side, to complete the “double” over Peterborough.

The three Easter defeats were very disappointing, despite Bentham’s freak goal against Gillingham at Haig Avenue; he scored from just inside the visitors’ half, goalkeeper Simpson badly misjudging his free-kick.

Blore excelled in Southport’s 7-2 F.A. Cup win over Cheshire League Macclesfield Town. His hat-trick was Southport’s first since George Bromilow scored five against Ashton United five years earlier. In the second round Southport – drawn, away for the first time since 1954 – were fortunate to finish all square at Bangor, Hannaway equalising ten minutes from time with a spectacular 35-yard shot. In the replay, ex-Southport forward Ray Gryba shot Bangor ahead but Jones and Blain each scored inside a minute and Blare’s second-half goal prevented any upset. At Stockport in the third round Reg Blore gave Southport an early lead, but County retaliated to win 3-1 to the dismay of the 1.800 strong Southport contingent.

At the end of the season Southport were involved in a tremendous controversy over the release of Peter Harrison Many people, including the local Trades Council, threatened to boycott matches f he were not retained; eventually the management reconsidered their decision, and Harrison stayed on!

John Church became Chairman in the close season, following the resignation of director Bob Howard who was ‘next in line’, vice-chairman Cyril Hodkinson having died in January. As Chairman of the General Improvements Fund Committee, Hodkinson had considerably augmented the Club’s finances. After five successive losses a profit of £2,612 provided a pleasant surprise in a season without transfer income. Despite finishihg a modest 14th, Southport could face the future with renewed confidence.