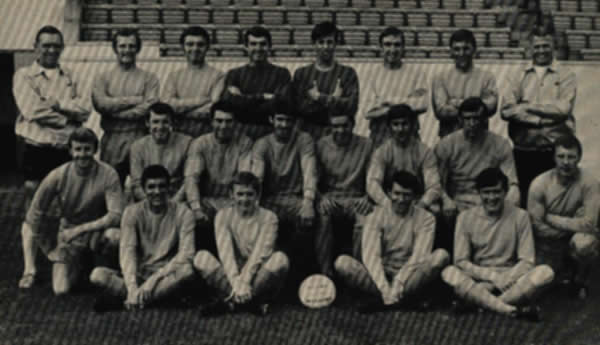 After three seasons in the Third Division Southport were relegated in circumstances which to the fervent supporter must have been near heartbreaking.

Early doors the side struggled through the forwards’ failure to capitalize on scoring chances created. Burdened financially with the cost or the new stand, coupled with their inability to make P.A. Cup progress, Southport were forced to transfer an off-form George Andrews to Shrewsbury Town for £9,000, having previously declined Plymouth Argyle’s £15,000 offer owing to the player’s objection.

After completing a record 25 home league matches without defeat Southport were well beaten by eventual runners-up Luton Town in September, although Manchester City had already won 3-0 at Haig Avenue in the League Cup second round; the first round saw Southport overwhelm Oldham Athletic with a tremendous second-half display. The Manchester tie attracted a record League Cup attendance of 11,215, each side receiving around £1,000.

Arthur Peat’s 300th league appearances was celebrated with a devastating 6-2 thrashing of Reading which followed a lack-lustre cup display at Fourth Division Lincoln City and ended a period of 438 minutes without scoring. Tony Field achieved a hat-trick against Reading and later scored three against Bury and all four second-half goals against Torquay United. The side’s best away performance was their 4-2 win at Gillingham — George Andrews, breaking a [lean spellt scored three times. Although highly praised for their great fight at Orient, the eventual champions, Southport lost 3-2 after leading 2-0 with 17 Minutes left.

Following Southport’s F.A. Cup dismissal rumours concerning Don McEvoy’s imminent dismissal abounded, but not until January 17th after a 2-2 draw with Doncaster Rovers did the directors request his resignation. Southport, with only three points from the previous six games, were anchored in the relegation zone. Almost immediately senior professional and captain Arthur Peat, who had created a favourable impression when given charge of the reserves in September, was appointed player-coach and a fortnight later became player-manager with Alex Parker returning from Ireland as a trainer-coach; the club simultaneously severed their connections with trainer Tommy Mycock, Peat inspired the team. Morale improved and Southport appeared to have pulled clear with five consecutive home league wins including a 1-0 success over Orient; furthermore they became the first ads to beat Brighton in 15 games. Then, quite inexplicably, they cracked, taking a mere seven points from their last eleven games. Art Mansfield and Reading the defence capitulated totally under pressure; against Fulham Tony Field missed a vital penalty and after monopolising the crucial encounter with fellow-strugglers Gillingham they allowed Gillingham the equaliser which kept them up and sent Southport down.

Among the eighteen players used — equalising the record fewest of 1960-61 — Southport found another useful youngster from Everton in Chris Dunleavey. Although a thigh injury sustained at home necessitated an operation, his powerful heading and aggressive style won him a first-team place; he overcame a nightmare home debut when he scored two “own-goals” against Rochdale. The experienced Eric Harrison from Barrow was a hard-tackling and dour defender, but forwards Keith Pring (Notts County) and Roy McCarthy (Barrow) shone only occasionally.

David Pearson won a Welsh Under-23 cap against Scotland in January but loss of form led to his release; he joined ‘Rochdale and later gave Morecambe good service. After six seasons at Southport the versatile Cohn Alty also joined Morecambe where he suffered repeated injury, Roy McCarthy eventually rejoined Barrow and the promising Alan Groves, who actually lived in Haig Avenue. was allowed to join Chester; a strong, determined raider, he subsequently signed for Shrewsbury Town, Bournemouth (for £40.000) and Oldham Athletic.

On Ppril 28th Arthur Peat resigned as ‘manager although retained as a player; Alex Parker became team manager on May 8th. A loss of £10,415 was sustained and the board reported with deep regret the passing; of ex-director Fred Thornley, a Life Member since his retirement.