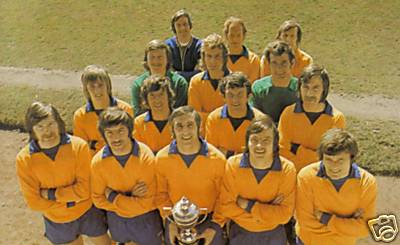 This was Southport’s “annus mirabilis”. They won the Fourth Division Championship—their first such honour since topping the Lancashire League in 1903—and broke record after record.

Never below third in the table, Southport assumed the leadership on January 6th when they recorded the biggest Fourth Division away win (equalled by Rotherham United the following season), by beating Darlington 7-0. In a fog-threatened game, the 1,088 spectators saw the home side completely demoralised; Jim Fryatt scored four consecutive goals. The ‘Port retained their lead for the rest of the season, winning the Championship by four clear points. Never before had Southport totalled 62 points and their 26 league victories were three more than their previous best. Other club records included seven “doubles”, a record-equalling seven consecutive away games without defeat, only eight away defeats and, in the New Year, four successive away games without conceding -a goal.

Brian Green, recently returned from a coaching appointment ‘in Kuwait -became trainer-coach, thus enabling Jimmy Meadows to concentrate on administration. Green, himself quite a character, deserved much of the credit for Southport’s success.

The only major setback comprised three successive defeats in November. ,including an -F.A. Cup reverse at Port Vale where Southport, the better footballing side, succumbed to physical ‘intimidation. On November 30th Alex Russell returned, signed from Tranmere Rovers, and .eight successive league games without -defeat followed. Russell showed all his old creative ability; it was his free-kick which rocketed home to register the dramatic injury-time equaliser against -Hartlepool and clinch the title. This match was watched by 6,533 – Southport’s biggest -crowd of the season.

The low level of support was the biggest disappointment; the average attendance at Haig Avenue, where only eight -points were dropped, was a mere 3,577. The -best home -performance was the 4-1 League Cup thrashing of Third Division Walsall. Southport went out at Notts. -County, despite fighting back pluckily after trailing 3-0. Away from home Southport often played brilliantly-certainly nothing surpassed their 3-3 draw at -Mansfield; the visitors dominated the game for long periods before needlessly conceding two late goals. A disputed last seconds goal at Hereford on Boxing -Day also deprived Southport of a thoroughly merited win.
The one problem spot was in goal, neither Taylor nor Gregson showing consistency. Greases, so promising earlier, let -in some simple goals, including a 45-yard effort by debutant full back Alleyne at Reading. He was one of -four players not retained; -Sandy Brown and David Turner were -freed, whilst skip-per John McPhee, whose influence was Incalculable, retired to manage his Blackpool hotel. ‘Many considered his goal against Hereford United Southport’s best of the season and his sound defensive work was greatly missed the following year.

Eric Redrobe—the idol of the terraces—joined Hereford United in October for £5,000. His arrival touched off their astonishing pro-motion challenge and, finishing runners-up in their first season, Hereford inevitably stole much of the limelight from Southport.

Jimmy Meadows won the Football League Fourth -Division -Manager of the Year award, comprising a £100 cheque -and a silver salver. It was his second Fourth Division championship—he ‘had piloted Stockport County to the title in 1966-67-but before 1973 was out, he was to be reminded just ‘how -precarious is a Football League manager’s job.

One sad note; Joe Moore-Editor, and formerly (Sports Editor, of the Southport Visiter-died in December 1972. A great friend of Southport Football Club, he just missed sharing -in their greatest triumph.