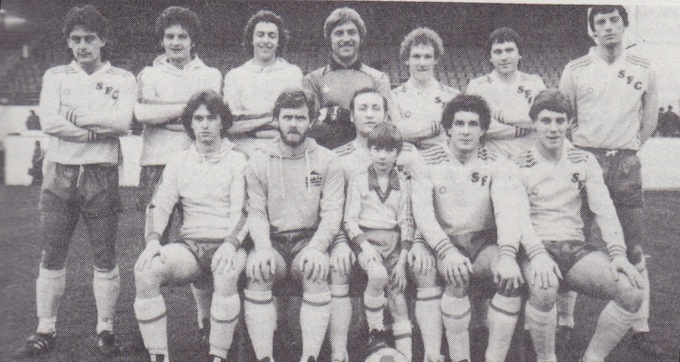 Yet the troubles were not quite over; Jim Gudgeon, appointed Managing Director in March 1982, resigned in the July and rumours soon abounded that the club was ‘up for sale’. Colin Hall announced that a consortium headed by player-manager John Johnson had taken over the running of the club for a month and negotiations were held with various interested parties (including the authors!) at venues up and down the Lancashire coast. Most bizarre was an upstairs room totally devoid of furniture in the Queen’s Hotel, Lytham after Southport had defeated the local side in a pre-qualifying round of the F.A. Cup; it was here that the Chorley F.C. contingent made a final attempt to get involved, but within a week or two a new board had taken shape.
Gary Culshaw, a Wigan based supporter of over thirty years standing, emerged as the new Chairman, appointing Barry Hedley as Vice-Chairman with John Johnson, Len Traynor and later Charlie Powell as directors. Colin and Deric Hall along with their colleague Dave Edwards resigned, as did Geoff Clarke as Secretary, to which position Les Rimmer returned for his first involvement since the 1930s.
A much more professional approach was adopted and the board was extended still further in January 1983 by the appointment of three new directors, among them Charles Clapham.
During the season Tommy O’Neil rejoined the club after spells with Tranmere Rovers, Halifax Town and Altrincham; it must have been déjà-vu for him when a third qualifying round tie in the F.A. Trophy took Southport to Spennymoor again, this time to an even heavier (5—0) defeat. In March John Johnson’s involvement ended owing to ‘numerous personal difficulties’ and both he and Len Traynor resigned
from the board. George Ross, who had been acting as coach, took up the reins and though the team suffered six successive defeats in April he was appointed Manager officially at the end of the season. Withinthirteen days he had resigned and Russ Perkins commenced a brief six months’ tenure.