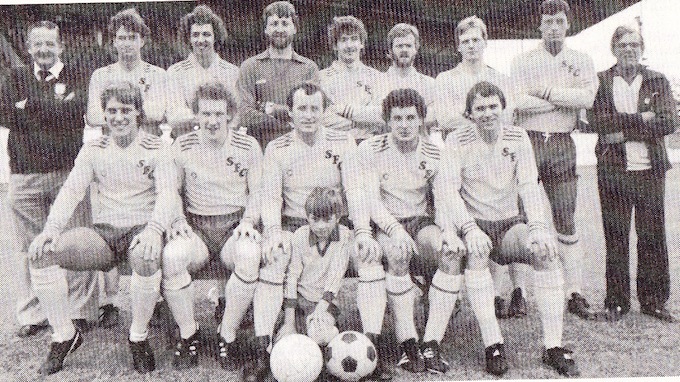 On the field the season of 1983-84 was undistinguished. Off the field it was a season of great change.

Southport started the season with Russ Perkins at the helm, and Alex Gibson and Bob Johnston assisting. Having brought a number of players in over the summer Perkins was hopeful of a season of success. Chairman Gary Culshaw had overseen further stabilisation at the club and was able to promise him that further money would be made available if it was required.

Perkins however didn’t see beyond the middle of November, a 4-0 defeat at Stafford Rangers sealing his fate. Alex Gibson was promoted to Caretaker. It was supposed to be a very temporary appointment as the club sought applicants for what was, despite the clubs recent troubles, still a very popular job. His first game in charge saw a 3-0 win at Skelmersdale in the Floodlit Trophy. It may be a competition that some chose not to care about, but we would thank Gibson for the result later!! After an FA Trophy defeat to Workington (via a replay) it was the turn of Bob Murphy’s Mossley at Haig Avenue. Gibson’s side gave them a thrashing. Neil Wood, Joe Strong (2) and Gary Cooper put 4 past them. It was the end of the road for Murphy at Mossley. Mossley had severe financial difficulties and after slashing their wage budget earlier in the season, his talented squad had started to dissipate and with dressing room unrest growing it was felt a change was needed.

In a remarkable turn of events, just days later and he was announced as manager of Southport. On 7th December, in the match day programme, a large piece by chairman Gary Culshaw set out why Southport felt they had the right man for the job. Embarrasingly however Murphy didn’t actually take charge of the game. He had changed his mind within 2 days of the appointment much to the frustration of the board (and I daresay the programme editor who had been unable to recall the programme from the printers!). Gibson continued in place and his side continued to pick up results and were unbeaten over the next 5 games.

Southport had been set to name South Liverpool’s John King as their new manager shortly before Christmas but the news leaked before King was able to advise the Holly Park Club of his decision to leave them and, despite applying for the job vacated by Murphy, King promptly wrote himself into the managerial record books by quitting the post before it had been officially announced that he had agreed to take over. After 3 managers in 3 weeks had gone by the wayside the board decided to give caretaker Alex Gibson an extended run.

Unfortunately for Gibson, the post Christmas form was nowhere near as good and he failed to record another win.

Such was Bob Murphy’s pedigree, the board were willing to try again with him – he returned to Haig Avenue to take charge properly on February 5th 1984. The following weekend, when Southport took on St Helens town in the Liverpool Senior Cup at Haig Avenue, Chairman Gary Culshaw was able to welcome Bob to Haig Avenue (again!).

“We were very disappointed when Bob declined the position last December, but we fully understood his position, and we were delighted when he intimated that he was now raring to go at Haig Avenue”.

Had the earlier John King news not leaked then none of this would have happened but within two months Murphy had become the first Southport manager to win a ‘Manager of the Month’ award. He also guided Southport to their first silverware as a non-league club with a win in the Lancashire Floodlit Trophy; the final of this competition was held at Deepdale, Preston where Horwich R.M.I. suffered a resounding 4—0 defeat, thanks largely to an inspired performance by an emerging young striker called Andy Mutch who netted a hat-trick. Local products Mutch, Shaun Teale and Rob Sturgeon had all made their debuts during the latter part of the season and were to play crucial roles over the next couple of years. Mutch and Teale were eventually to achieve wider fame in the Premier League. After a terrible few years of uncertainty concerning the clubs future any success was to be celebrated and with all signs pointing towards further success, by the end of the season he had been offered a two-year contract by chairman Gary Culshaw.

For a club who just 2 years before had faced possible extinction due to financial problems similar to those Murphy left behind at Mossley, it was quite a statement to make – not only about the stability of the club – but also as a vote of confidence in the man trusted to manage the team. The irony is that the only cup success that chairman Gary Culshaw oversaw was this one, and it was against a club for whom he would later go on to hold a board level position also.

In the summer the were a number of boardroom changes at Haig Avenue. While he was away on holiday, Gary Culshaw was ousted as Chairman by the other board members and Charles Clapham was installed in his place. This led more or less directly to his resigning from the board, though, as the major shareholder, he kept a continuing interest in the club’s affairs from a distance. It was an unpopular move at the time as Culshaw with his quiet ways had endeared himself to many supporters as a genuine person who had brought much stability to the club’s affairs and the manner of his removal was resented. By contrast the brash, confident Clapham took quite a while to convince the Southport public of his bona fides, enduring a long spell of latent hostility whilst all the time keeping the promise that there would be no further financial crises during his term of office.

Clapham was joined by a new addition in George Denison, a man with, according to the new chairman, “knowledge of the game and business acumen [that] will add strength to our board”. Upon his appointment Clapham commented that “We are financially stable, have a hard working and dedicated band of workers on the board and behind the scenes, and, in Bob Murphy, a full-time manager of proven calibre, a man who will never accept second best”.

Whilst Murphy undoubtedly had ambition and proven calibre, something the club clearly wanted, that alone was not enough to disguise the feeling that he was a tough character to be around. Indeed the comment that he will “never accept second best” hints at knowledge of prior disagreements and of needing to carefully manage him.