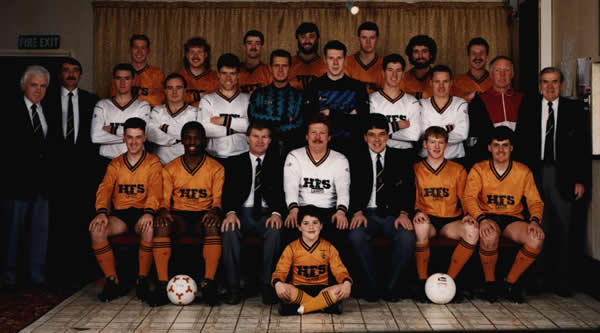 The club took their time in choosing a successor; by the end of May his identity was revealed. It was the former Liverpool reserve team captain and latterly South Liverpool manager Brian Kettle.
He could hardly have faced a more demanding challenge. The previous season’s squad virtually disintegrated, several following Taylor to Fleetwood. In essence Kettle was left with just three — goalkeeper Andy Johnston, promising young full-back Stuart Bimson and club captain Rob Sturgeon, now in his seventh season at Haig Avenue; even the latter had to depart early in December when a job promotion took him to the Midlands. Inevitably there were many comings and goings over the early months as the manager struggled to mould his side; performances suffered and it was mid-October before the ‘Port scrambled out of the bottom two places.
Despite all this the makeshift team won three F.A. Cup ties and only Whitley Bay stood between them and another appearance in the potentially lucrative first round. The North-Eastern side, whose goal featured the 35-year-old Tony Har¬rison, Southport’s last Football League ‘keeper, had already won 3-2 at Haig Avenue in the F.A.Trophy; on this occasion lightning did strike twice and, with the new manager bravely admitting to two mistakes in team selection, Southport went out at home.
That virtually killed off any aspirations of success on the field and, when soon afterwards rumours circulated of bailiffs going in to Haig Avenue to try to recover the £22,000 still owed to Sefton Council for the demolition of the unsafe covered terracing over two years earlier, threats of another financial crisis loomed. These were soon scotched when agreement was reached to pay L250 per month for the next seven years and calm returned.
Significant steps were taking place in team-building too; over a period of eight weeks towards the end of 1989 Kettle picked up Ossie Smith, Bob Howard, Steve Whitehall, Steve Holden, Alan McDonald and the returning Ian Baines, all of whom were to make telling contributions to the achievements of the next few years. February 1990 even saw the reappearance, for a third spell, of the skilful Tony Quinn and the new blend began to yield results. By the time the season ended (in front of a supporters’ fancy dress parade at Rhyl!) Southport had climbed back to a very commendable seventh place in the table. Brian Kettle had passed his first test.