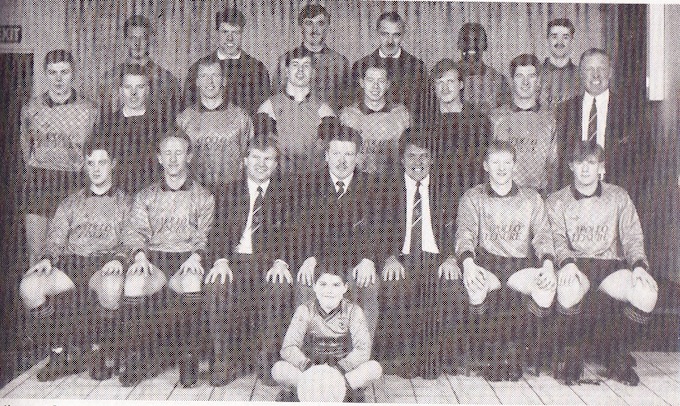 Southport got off to a dreadful start in 1991-92 and were actually bottom of the table in late September. It was October 5th before the first League win came and though the sequence of seven games without defeat that this inspired ended at Leek on November 9th, there then began an even longer run of 16 League games without defeat which lasted until the visit to Goole Town on March 21st. In the end Southport claimed seventh place in the table, far higher than had appeared likely early on.
The reason for the failure to capitalise on the success of the previous year lay in the departure of several key players. Steve Holden had left abruptly for Morecambe
and when, in July, Rochdale came in with a £10,000 bid for his scoring partner Steve Whitehall, the offer — augmented by extra sums based on appearances and goals — could not be refused. Almost immediately his colleague the versatile Alan McDonald joined Witton Albion and, after lengthy negotiations, Stuart Bimson was transferred to Macclesfield Town. Of Kettle’s close season signings only the impish Jon Senior was to make a significant impact. A period of retrenchment was obviously due.
The corner was turned with the arrival in late September of the controversial red-haired striker Tony Jarvis from Witton. His debut sparked the first win and his successful linking with Jimmy Blackhurst up front compensated in part for the absence of the two ‘Steves’. The attack was later reinforced by the surprise return of local favourite Kevin McCormack, who scored regularly in his third spell with the club, and little Steve Joel — the very last link with the Football League days — who, at 37, showed an amazing turn of speed and a prodigious capability with a throw-in!
More seriously, whilst Ian Baines had returned from an operation on his leg the previous summer, the cruciate ligament injury sustained by Jimmy Blackhurst in the Liverpool Senior cup-tie at Tranmere Rovers in March looked to have finished his career. Surgery eventually came to his aid also, but it was two years before
he was to take the field again for Southport.
A good run in the F.A.Trophy, long overdue, also brightened the 1991-92 season and featured some resounding victories, notably at Alnwick and Rhyl; but it ended in disaster at Farnborough Town on February 1st when some suspect team selection — including Kevin McCormack’s relegation to the subs’ bench —could not be held entirely to blame for the 5—o defeat. A more cheerful note had been struck earlier in the season when the authors staged the second great Players’ Reunion, ten years on from the first, with invitations being extended this time to some of the prominent performers from the N.P.L. days. The Prince of Wales Hotel was the venue and the attendance of well over 100 former footballers demonstrated the affection in which the club is still held.
Candidates for ‘Player of the Year’ had included the popular Paul Moore in goal and the ever-consistent Kevin Mooney but in the end both supporters’ and players’ awards went to Bob Howard, whose resolute performances in the centre of the defence had held the side together throughout. It was thus all the more surprising that he failed to command a place the following term and soon departed; but 1992-93 was a season of surprises.