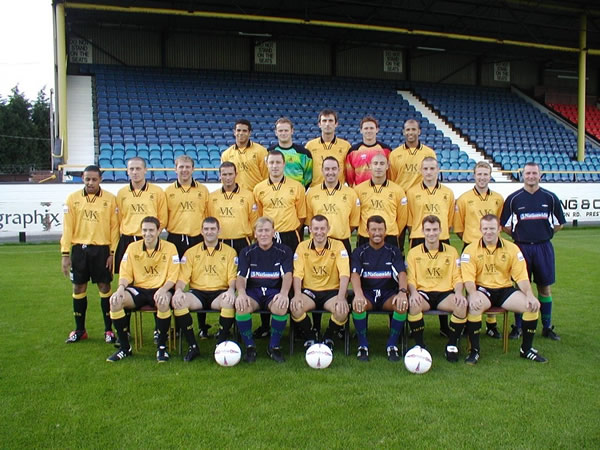 The 2002/03 season probably ranks as the most topsy turvy any club could possibly imagine. We were fourth in November, we had beaten Notts County in the FA Cup
but we ended up being relegated on the final day of the season. Wilson departed at the start of February to be replaced by the hapless Mike Walsh. From hero to zero in 4 months. Nobody knows what happened following the excellent giant killing win over Notts County but the wheels fell off in a big way. The Notts County game was on Match Of The Day and saw us come back from 2-0 down with four sensational goals, one of which, from Syd Pickford came close to winning goal of the season on national TV. It was a day of high emotion that everyone present will never forget. We went on to lose 3-0 at home to Farnborough in the next game and from then on it was down hill. Only a remarkable 4-3 win at a waterlogged Halifax in March gave us a bit of hope but things were looking bleak. We all thought we had done enough however and relegation was impossible but we went into the last game of the season at Stevenage knowing we had to win to survive. It was abject surrender and in front of a sizeable travelling contingent who made the most of a generous travel subsidy from Charlie Clapham to pack out the Stevenage away end the Yellows ten year stay in the Conference was over.