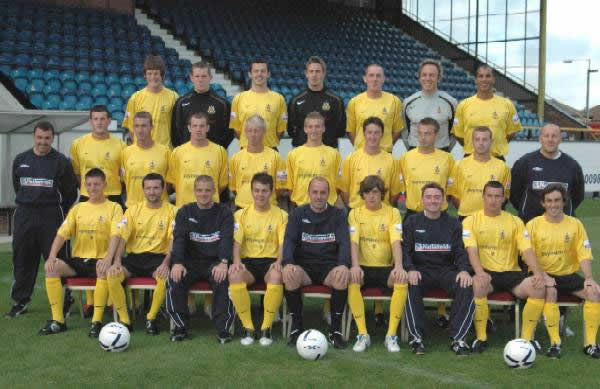 The 2006/07 season started early and in chaos. Liam Watson left the club on 23rd May 2006 and from then on it was downhill. It depends who you listen to and which version you believe as to what actually happened. Liam had resigned and it left us in a mess and with the appointment of his replacement being left until 13 June we effectively lost 6 weeks of the close season.
His replacement was Paul Cook, no managerial pedigree but lots of experience and with lots of contacts in the game, or so we thought. It started to go horribly wrong as player after player left and the ones coming in didn’t really inspire or enthuse the fans and by the time kick off came around we didn’t know what to expect as a virtually new team took to the field against Woking. We could and should have won that game as Mark Boyd missed a penalty. Next up was Halifax (late goals guaranteed) Town and they didn’t let us down scoring with the last kick
of the game for the second season running to deny us 3 points. Instead of 6 points we had 2. The late goals were going to be a major feature of the season with 18 coming in the last 10 minutes and we dropped 11 points and suffered an FA Trophy exit between the 89th and 97th minutes of matches, they would have made a big difference in the final reckoning. A bad home defeat against Rushden & Diamonds was followed by a fortunate but very welcome win at Burton Albion with the goal of the season being scored by Mark Boyd. We kept getting some good results, 2-2 draws at (runaway leaders at the time) Oxford, York and Aldershot were interspersed with poor home performances. An FA Cup defeat at home to Conference North Kettering was we thought the result that would possibly see the end of Cook. It was not to be. Results continued to be mixed but a disastrous spell over the Christmas period culminating in a 3-1 defeat at Northwich which saw us go bottom saw Cook sacked. Dino Maamria and Steve Whitehall were put in charge for the home game against Grays which we won 3-1. A very unlucky 94th minute defeat at Salisbury in the FA Trophy saw us exit that competition. Peter Davenport took up the reins at Crawley where we lost 2-1 with, you guessed it, a goal in added time. A highly creditable point at Morecambe was followed by a home defeat to Forest Green. However we now embarked on a decent run which saw us climb up to 21st. We then came up against the top two with the new runaway leaders Dagenham & Redbridge hammering us 4-1 and Oxford just scraping home 1-0 a defeat which put us bottom of the table. The crunch game at St Albans saw us draw 2-2 with another late goal going against us and most of us starting getting out the maps to Workington and Redditch. Defeats at Stevenage (two late goals again) and at home to Weymouth when Jason Matthews (the keeper) scored with a wind assisted clearance in the 89th minute saw us way behind with no hope, or so it seemed. A good point at Woking followed up with a point at home to Halifax who again scored in added time was not enough and most of the supporters had given up. Some hope with a 5-1 win against Stafford followed by an excellent 3-2 victory at Rushden & Diamonds followed by a super home showing against Burton Albion and we were back in the mix. This was followed by a 4-0 win at play off contenders Gravesend & Northfleet, we were still in with a chance. Unlikely but possible. The downside was we had to play York and Exeter who both needed wins to confirm their play off places. Excellent marketing of the home game saw our home NL attendance record shattered as 3206 turned up at Haig Avenue, the highest home league gate for 33 years. It was not to be and the 1-0 defeat virtually condemned us to relegation. It was confirmed the following Tuesday when results went the wrong way and we were down. A full Trust In Yellow coach made the trip to Exeter out of loyalty for what turned out to be a big game for The Grecians who needed a win to qualify for the play offs.
We gave them a mighty scare and lead up until the 65th minute but two goals in two minutes saw Exeter take command and make the play offs. The atmosphere once they scored was probably the best ever heard at a Southport NL game, they were noisy! This was the highest away NL gate (6670) we had ever played in front of, in two weeks we had beaten the home and away attendance records. We had to build to bounce back stronger than last time. We had struggled for the two seasons we spent in The Conference National.
The positives, Haydn Preece, whose appointment as Chief Executive was a masterstroke, Haydn loves the club and the energy and enthusiasm he showed during the season was unbelievable. Some great off field activity which considering the poor season on the field saw even the most perennial of moaners admit he was doing a good job in that area.
Trust In Yellow continued to flourish with 345 members in place. Coaches ran to 18 of the 24 first class games, a superb effort. The idea had been to run the coaches at break even and this was achieved. Considering some of the fare on offer at times it was a remarkable achievement. A regular group of followers took to the roads and the 45 minute stops at Norton Canes Services on the M6 Toll Road became legendary. The Trust also worked closely with the club in a number of other areas and relationships between fans and officials improved.