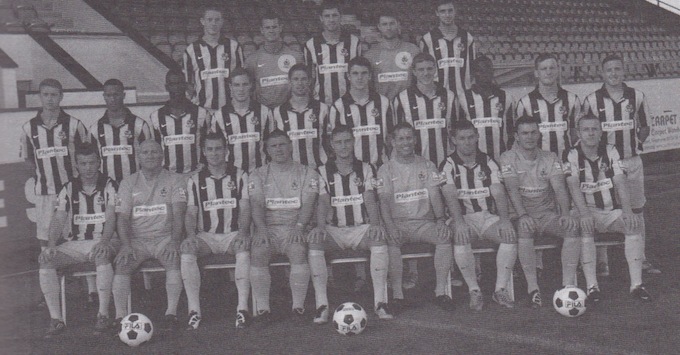 Following the unexpected successes of the previous campaign, the club entered the close season full of optimism and expectation for the season ahead.
The summer saw the inevitable reshuffle that a club on a meagre budget is often faced with. Prime target for Liam Watson was Godfrey Poku, a midfield terrier who had impressed so much during his prior loan spell and who had been released by Luton Town. Offered full-time football, Poku elected to join the ambitious Mansfield Town instead and following him to the stags was Andy Owens, a man who’s career had been restarted by Watson the previous season following his release from Accrington.
Neither Owens or Poku settled into the side at Mansfield and within months both were back with the Sandgrounders on Loan.

In came Chris Almond a winger from Skelmersdale United, who would go on to finish top scorer in his first season.

With indifferent form in the first half of the season, things turned sour after Christmas. A run of just 1 win in 11 games saw the Sandgrounders plummet down the table, finding themselves in 20th place by Easter, perilously close to the trap door, quite a change from the previous season where they had been knocking on the door of the play offs. The Sandgrounders were assured of safety with a game to spare but then the bombshell was dropped that Watson was leaving for pastures new and two weeks later he was appointed manager of AFC Telford United.