Skip to content
You are here
Home > Club History > Book Review – Golden Days: Falling for Southport FC in the Sixties 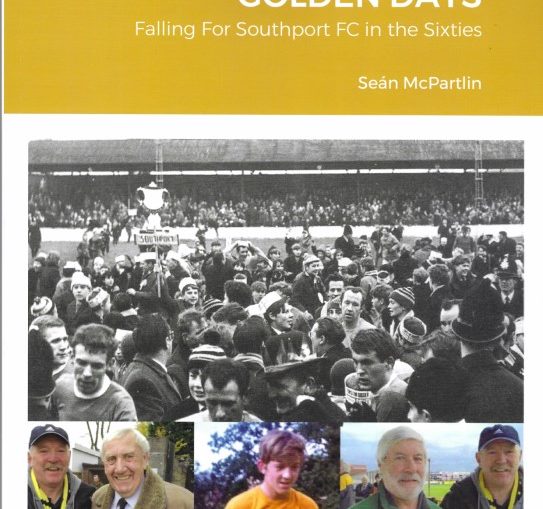 An early christmas present dropped through my letterbox. It was Sean Mcpartlin’s book “Golden Days”. After starting the book, I simply couldn’t put it down. Sean held me enraptured by his word pictures. It is a must read for all Southport supporters – not just those of a certain age, but younger fans too will enjoy reading about happier days when Bingham’s boys put Southport Football Club well and truly on the football map after being almost down and out twelve months earlier.

Sean Mcpartlin has an amazing ability to recall the sights, sounds and smells at Haig Avenue in the 1960s (and here i am talking about the toilets on the Popular Side). Like so many of us, our earliest memories remain indelibly imprinted in our minds. Sean is to be congratulated on bringing to life the excitement of the 1965-66 FA cup run as seen through the eyes of a fourteen-year-old and promotion the following season. It’s all there; prominence is given to Sean’s heroes like Eric Redrobe, Colin Alty, Alan Spence, Arthur Peat, Brian Reeves (and like me he rates Alex Russell as being the best of them all) but then so are the lesser lights like Stan Hepton! Then there is the shock of learning about the fire, the characters in the Haig Avenue crowd, and the more mundane events like how he travelled to the games by bike and the visits to the chip shop afterwards.

Sean’s ability to remember incidents in games is incredible, whether it is Alan Spence’s bizarre goal at Chesterfield or that spectacular own goal by Darlington’s Lance Robson at the start of the game on 8th February 1964. Anyone who missed the Stockport County second round cup tie at Haig Avenue in December 1965 can recapture the excitement of the game by reading Sean’s memories of that game and I must confess to having tears in my eyes when I read his account of that never to be forgotten win at Tranmere which all but clinched promotion in May 1967.

Writing about events which took place more than fifty years ago it is inevitable that there are occasional lapses of memory, but these are mercifully few. “Golden Days” records Sean’s love affair with Southport Football Club. It is a snip at just £7.99. This book is a reminder of all the enjoyment and pleasure (aye, and the heartache too) that we have experienced. Every Southport fan should buy a copy and read what it means to follow “the Sandgrounders”.

2 thoughts on “Book Review – Golden Days: Falling for Southport FC in the Sixties”

On This Day: January 10th