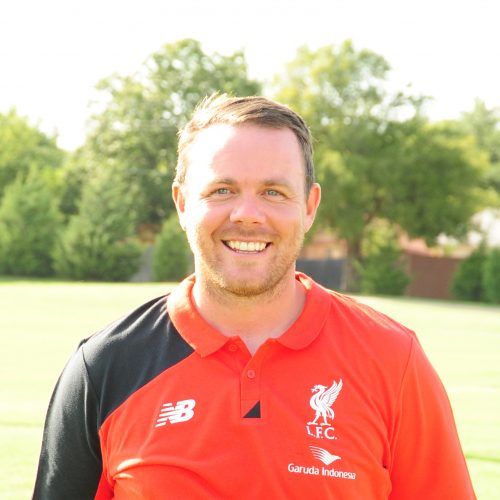 The odds are stacked against any young player making it as a professional or semi professional footballer so the odds of, having done so, also being also able to one day call yourself a title winning captain are incredibly small. The man I caught up with over the weekend, can tick both of those boxes on his football CV and much more besides, and now carries the responsibility for one of the biggest clubs in the world of trying to develop the next generation of footballers.

Adam Flynn started his career with Liverpool’s academy back in 1998 and was a regular and captain in their youth and reserve sides until his release in 2004. Whilst the Anfield club let him go as a player they had obviously recognised that he was a man with qualities that not every player possessed and they offered him coaching position in their academy.

Adam took the position and fitted it around an impressive non-league playing career that started with Prescott Cables. After 3 years he made a move to Liam Watson’s NPL title winning Burscough side where he was an ever present and awarded the manager’s player of the year in his debut season.

When Liam Watson left to rejoin Southport at the end of the season he made sure that Flynn was one of the eleven players that followed him.

2009/10 turned out to be a successful season for the Sandgrounders and for Flynn as captain but once back in the Conference work commitments began to interfere with his ability to compete at Conference level and he was reluctantly transfer listed. Having been made head coach of Liverpool’s soccer schools in 2008, Flynn was needing time away from playing to fulfil the duties of his day job and as Watson stated at the time “the minute your captain isn’t the first name on your team sheet, something had to change”.

After leaving Southport in 2011 he moved to Altrincham for a season before retiring at Warrington Town in 2013. However, his coaching career has flourished. Promoted first to head coach of Liverpool’s International Football Academy he then made the move to Texas with his family and took up the Senior coach and Technical Director roles in Liverpool’s American coaching programme.

You followed Liam Watson to Southport as one of eleven players that made the switch from Burscough in the summer of 2007. It’s pretty unusual for transfer dealings to happen in that way, what was it like as a player being part of it?

If I remember correctly I was last to go, I’m sure it was part of Liam’s strategy to do it that way but it really left me nervous seeing my current team fall apart around me. But we were moving for good reason, Burscough is and was a tremendous stepping stone to higher level football.

Yes, Pre-Season, ugh! I just remember running until I couldn’t stop somewhere at the back of the group.

1st game was Away at Stalybridge and we won 1-0, solid defensive performance from the lads. Great anticipation all around for the season ahead!

Going to any new club is always difficult but Liam installed you as club captain straight away – did you feel that it added any pressure to you or was it something you were comfortable with?

Captaincy comes with its own pressure of course but I’d been a captain all my life, I was ready and Liam new it. At just 20 I captained Prescott Cables and that put me in good shape in future teams including Southport where hopefully I didn’t disappoint.

Whilst your first season didn’t end with the silverware we aimed for as a team, you picked up some of your own by collecting the clubs player of the year award. You had been given the manager’s award the season before at Burscough but what did that mean to you knowing that this one had been voted for by the fans?

It was a fantastic acknowledgement from the soul of the club, the fans. They see the game many different ways but more importantly have that unconditional love for their team that parents have for their kids. Players, coaches and chairman come and go but the fan will remain forever. Thanks to them for rewarding me my my efforts that season.

You described your second season in one interview as “definitely the pinnacle of my career as a player”. Can you describe what it was like to be in the dressing room as we battled it out with Fleetwood for the title over the last few weeks and months of the season?

It was a little weird because of the whole Farsley Celtic deal but we knew we had to keep putting points on the board. Nothing changed game to game the message was always the same, win.

Did you always believe that we were going to win the title and if so, what gave you that confidence?

Just take a look at the squad from that season, a great mix of experience, youth and all out good lads. A lot of people talk about the uniqueness of non-league dressing rooms and it’s true, the bond between Liverpool and Manchester has never been stronger! Liam gave us tat confidence since day 1 well before we came to Southport, it was just Ports good instinct that Liam would bring success with his appointment. I remember Liam saying at the first game of the season 2 points a game will win us the league, and it took more than that, the lads always gave more than what was asked. That’s why we were champions.

Looking back at the squad we had, why do you think it was so successful?

We had winners in the team, we had goal scorers, a great keeper, a solid back line and an engine in midfield. At times is wasn’t pretty but we got the job done. A lot of credit must go to Watson who I believe had finally assembled his best non league team since his last Southport promotion. It’s what Liam did well that separated him from the average non league managers. He knew the league but most of all he knew the players that could win the league.

Do you still keep in touch with any of the lads today?

Of course, I work closely with Alan Moogan, I’m inspired daily by Earl Davis (who isn’t) and we all keep in touch on whatsapp from time to time.

Do you have any embarrassing stories that you can share about any of the squad?

Not really. We wouldn’t be embarrassed by anything that happened back then it was all just banter and we loved it.

As I’m sure you’re aware Liam Watson has rejoined the club and now sits on the board as Operations Director. Can you give us any interesting Liam stories?

Liam is a great manager…stories? No – Liam loved the team and the club just as much as anybody else and gave his all to make it a success and the man made it happen, you have to respect that.

Other than the title win itself what was your most memorable Southport FC moment?

At the end of your first season Liam had handed you a new 2.5 year contract in recognition of your performances. History tells us that you didn’t quite make it to the end of it as Liam transfer listed you in 2011 due to increasing work commitments. When he broke the news to you, was it something you could understand?

Yes, I respected the clubs decision and there were no hard feelings. It was the best thing for the team and the club, although I felt I had more to give at the time, looking back Liam was right.

Since you’ve left Southport you’ve gone on to make a successful career in coaching with Liverpool. Can you describe what your current role entails?

I am currently living and working in Dallas, Texas. Home of the Dallas Cowboys! I am the Technical Director of Liverpool FC’s International Academy in America. I moved to the states 3 years ago with my wife and kids (Pierce 11, Lola 5). We love life here and have no intention of returning anytime soon.

Finally, what does the future hold for Adam Flynn?

Life in America, great career opportunities in the game that I love and more importantly, more time with my family.

I’d like to thank everyone at the club for their respect and support through my Southport career. I avidly look out for their results every week in anticipation of a win. Keep up the good work and I can’t wait to return to Haig Ave to watch a game soon. 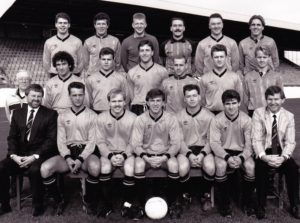