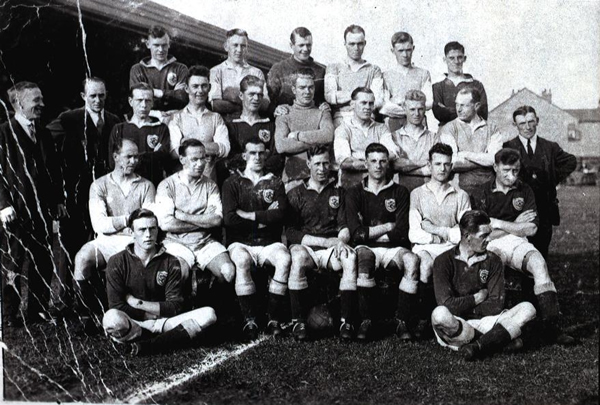 In the first article in the series we look at two record breakers, Jason Gilchrist and a remarkable FA Cup run in 1926/27.

For Jason Gilchrist it has been an incredible 12 months since he signed from FC United of Manchester. In his first season he scored 11 goals in 24 appearances for the club but his goals on this date in 2017 hold particular significance.

Jason became the first Southport player in our history to score a hat-trick on his league debut.

Others had come close, Lee Mulvaney probably the most closest as he scored three at Halifax in his first full league start. He had however made a solitary substitute appearance already.

Bert Valentine and Ben Twell had both scored hat-tricks in their second games and a man famous for his ability to notch 3,Joe “Hat-Trick” Patrick, scored on his debut then got two in his second game before his first hat-trick on his third appearance.

Our second record didn’t actually happen on this day, so I’ve cheated a bit, but it is part of a story which does lead to a record, so I’m including it anyway. (The record breaking act actually takes place on 29th January). That story is our FA Cup run in 1926/27 which on this day saw us beat Tranmere Rovers in a first round replay (coincidentally Southport face Tranmere in the FA Cup today too!)

George Sapsford had scored a late equaliser for Sandgrounders in the previous game which had been rather fortunate, but the replay at Prenton Park was a different story.

The following account of that cup run is reproduced with permission from The Sandgrounder (Southport FC Matchday Programme) Article Series. Southport through the seasons. The League History of Southport FC, Compiled by Michael p. Braham and Geoffrey S. Wilde.

“Beadles opened the scoring with a beautiful header and George Jones seated the victory with a brilliant goal.

“Crook Town were easily accounted for in the second round at Haig Avenue, and the third round draw paired Southport with First Division Blackburn Rovers. Southport had an old score to settle with the Rovers, as they had knocked out the ‘Port five years earlier. Blackburn. a side with a great Cup tradition fell at their first hurdle; first young Tommy Wnite-schoolboy star of the early ‘twenties—surprised the experienced Sewell, Blackburn’s goalkeeper, to put Southport ahead and then, after the interval, Beadles scored the second.

“Unfortunately, an injury prevented Beadles from taking part in the fourth round tie, when Southport finally met their match, losing 3-1 at Anfield in front of 51,6,10 (receipts £3,200) which still remains the highest crowd before which they have played. Southport appeared overawed by the occasion, and were well beaten on the day: had Liverpool’s shooting not been so wayward the score would have been higher still. The team which faced Liverpool was: Halsall; Allan, Glover: Sinclair, Newnes, Bimson; Jones (G. W.). Marshall, Bradley, Sapsford and White.

“Shortly afterwards Tom White was transferred to Everton, where he enjoyed great success. helping Everton to two championships and gaining a cup-winner’s medal and an England Cap against Northern Ireland. The substantial fee received for him and the good Cup run resulted in Southport recording a profit of over £1.300 on the year.”