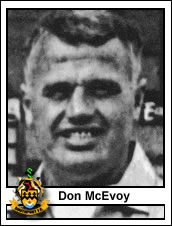 Don McEvoy was born at Golcar, Huddersfield on December 3rd, 1928. Although he made his Huddersfield Town debut at centre-forward he was later converted to centre-half and gained prominence as one of seven ever-presents in the side which finished runners-up in Division II in 1952-53. He moved to Sheffield Wednesday in December 1954 for k 5,000 and captained ‘The Owls’ to the Second Division title in 1956-57. He was player-coach at both Lincoln City and Barrow and then managed Halifax Town, Barrow and Grimsby Town before coming to Southport in February 1968 in succession to Billy Bingham.
Under his managership in 1967 Barrow had been promoted for the one and only time in their history but he had enjoyed little success at Grimsby. At Southport McEvoy was awarded
, a three-year contract and in 1968-69 the board had to resist overtures from Ipswich Town who wanted him as their manager. Don McEvoy reversed the team’s recent defensive complex and they played some attractive football to finish a respectable eighth in the table. In addition the club won both Northern Floodlit League titles, Championship and Cup.
Following Southport’s F.A. Cup dismissal in November 1969 rumours abounded concerning McEvoy’s position. The millstone of the cost of the stand to replace the one lost in the fire hung round the club’s neck and resulted in the enforced sales of Terry Harkin and George Andrews. With poor results arising mainly through the inability of the forwards to accept their chances and a slump in home gates after gaining only three draws in six games, the directors asked for McEvoy’s resignation of January 17th, 1970.
The following month he was re-appointed manager at Barrow but his second spell proved to be disastrous as they finished bottom of Division III in 1969-70 and next to bottom in Division IV in 970-7 I . After being relieved of his duties in November 1971 he withdrew from football to become a publican in Brighouse, from which occupation he has only recently retired.

Don McEvoy, who enjoyed a lengthy career in the game as a player, coach and manager has died at the age of 75. A big powerful centre half, he made 350 Football League appearances and then spent almost a decade in charge of a series of lower division clubs.
Born in Golcar near Huddersfield on 3 December 1928, Don began his playing career as a centre forward and after developing in local football he was signed by Huddersfield Town in September 1947. It took him two years to break into the first team, and although he made his senior debut as a forward he soon switched to playing at centre half. A sturdy and reliable defender, he was a member of the Huddersfield team that won promotion back to the old First Division in 1952-53.

Forming a powerful half-back line with Bill McGarry and Len Quested, Don was one of seven ever-presents for the Terriers that season. The following campaign was the club’s best-ever in the post-war period and they finished in third place in the First Division. However, Don eventually lost his place through injury and in December 1954 moved on to join Sheffield Wednesday. Signed to shore up a leaky defence, he was unable to prevent the Owls from being relegated that season, but then went on to captain the side to the Second Division title in 1955-56.
In January 1959, Don signed for Lincoln City who were then struggling to avoid what seemed to be an inevitable relegation from Division Two. Although he failed to stem the tide of goals conceded, he was instrumental in ensuring that the Imps stayed up that season, despite losing their last three games. In the summer of 1960, Don was on his travels again, this time moving north to join Barrow as player-coach, the first of three spells that he was to enjoy with the Holker Street club.

Don retired from playing at the end of the 1961-62 campaign and in May of 1962 he was appointed as manager of Halifax Town. Despite the fact that the Shaymen were relegated after his first season he stayed in the post for a further year before returning to Barrow as manager in the summer of 1964. He then went on to enjoy spells in charge of Grimsby Town (1967-1968), Southport (1968-1970) and Barrow for a second time (1970-1971). Although something of a traditionalist in his approach to the game, Don’s teams generally earned a reputation for playing bright, positive football. His greatest success as a manager came in his first spell at Barrow, when he led the side to promotion to Division Three in 1966-67, the only time the club was ever promoted during their stay in the Football League.
Don eventually left football towards the end of 1971 to become the landlord of the Crown public house in Brighouse, West Yorkshire, and later worked as a summariser of matches for local radio. He died in a Halifax nursing home on October 9.