Eddie Moss who died earlier today was one of my first footballing heroes. Perhaps it was his dark curly hair and boyish good looks or the fact that he hailed from Skelmersdale (which meant he was almost a local in my eyes) or most likely that he was the side’s top goal scorer that made him favourite of  mine. 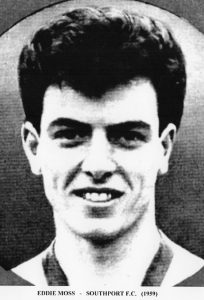 Eddie who was 81 years started with Skelmersdale schoolboys and was selected to play for the Lancashire County team. He joined Everton on leaving school and was chosen for the Liverpool F.A.Youth team that played in Ireland. At that time he was a centre-forward but on being released by Everton he joined Skelmersdale United where he developed as an inside forward turning part time professional with them. After some good displays in the Lancashire Combination he attracted the attention of Liverpool who paid Skem a fee of £500. Eddie graduated into their Central League side whilst at Anfield but was handicapped by a back injury.

Signed by Wally Fielding in July 1959 Eddie, playing at inside-right, was top goal scorer in his first season at Haig Avenue with twelve goals in thirty-nine League games. His most significant achievement was the 65th minute winner at Oldham to give Southport their first away win in 46 games. The following season he had  fewer opportunities when first Ken Booth and later Johnny Fielding were preferred but he made a further 15 League appearances scoring goals including one against Hartlepools United in what was a then record equalling 5-1 away win in December 1960.

Released at the end of the season he joined Runcorn in the Cheshire County League giving them eight years splendid service and he was considered “a legend” by the Linnets fans. He made a return visit to Haig Avenue in the Second round F.A. Cup tie before more than 13,000 spectators which Southport won 4-2.  He finished his career with spells at Altrincham and Kirkby Town.

Eddie, who also enjoyed a game of cricket in his younger days, went into the family coal business until selling out to his brother in 1983 and thereafter took a pub in Skelmersdale.

Although Eddie had been in poor health for some time,  he nevertheless attended a match at Haig Avenue when he was photographed with Sam Shrouder as well as the’ Hall of Fame Class of 2019’  in November  2019. He brought along not only his wife Glenys and daughter Vickie but also his scrapbook together with a host of happy memories of playing for Southport Football Club sixty years earlier.

Our thoughts are with wife Glenys, daughter Vickie and son Michael at this difficult time.

On This Day: February 11th