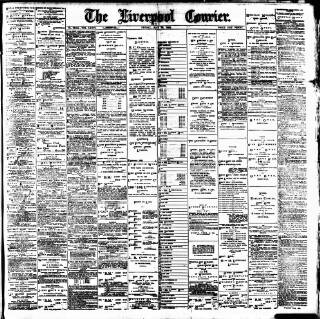 The above match was played at Stanley-Park on Saturday, and resulted in an easy win for Everton by seven goals to one. From the commencement the Southport visitors were “not in it” the Everton forward being too much for them. Douglas having got possession sped away down the field, and secured a corner. The kick was entrusted to W. Marriott, and so well did he place the ball to Sinnott that player had no difficulty in scoring a goal for Everton. On restarting Watson became conspicuous and judiciously passing to Scott that player also scored a very neat goal. The third goal was taken by Jackson at half-back. From a long shot Scott obtained the fourth out of a scrimmage, and Watson the fifth, his shot being the best of the game. Douglas, who was playing up well, again centred and Taylor neatly put the globe through the posts, thus making six goals tom the credit of Everton. During the first half of the game the Everton goalkeeper had only to kick out once. On changing ends a tight game was expected, for Southport had now both wind and hill in their favour, Finlay especially distinguishing himself by his sure back play. From another screw shot by Douglas, T. Williams was enabled to add another goal to Everton’s score. P. Halliwell now scored the only goal for Southport, but it was objected to, as he was off side, and the two umpires disagreed, but Everton allowed it as a goal. Teams; – Everton; – Brettell, Finlay, Jackson, Marriott, Douglas, Scott, McGregor, Watson, Taylor, and Williams. Southport; – Lawton, Johnson, Crowder, Aughton, Idden, Smalley, Hatch, Mayall, Halliwell, Hatch and Halsall.