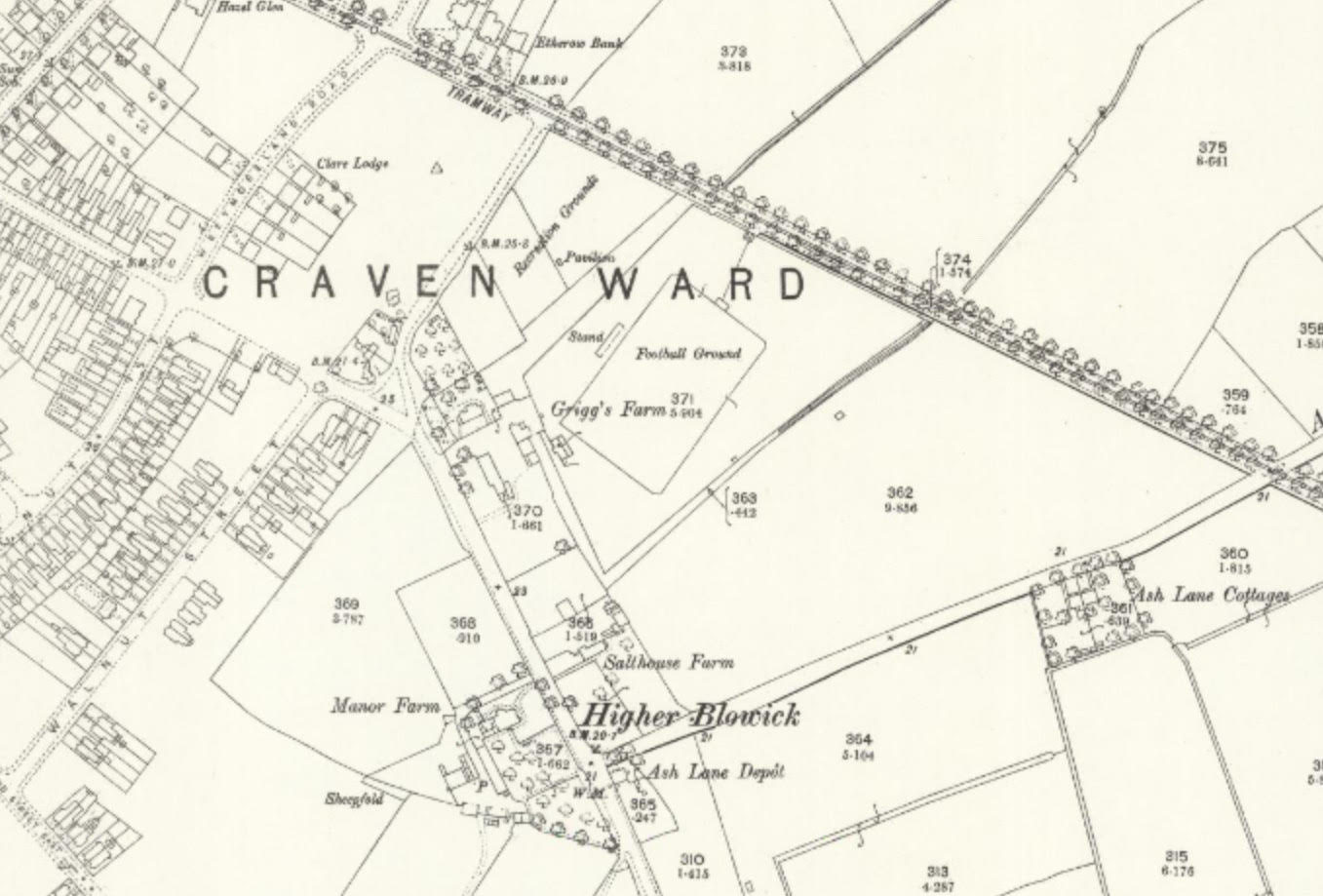 Southport Olympic are understood to have played at a ground at the corner of Scarisbrick New Road and Ash Street backing onto Southbank Road. Southport Football Club (playing association football since 1881) played on an adjoining pitch between 1881 and 1884. Such was the lack of popularity of the sport in the town, spectators are said to have left the football field when Olympic began playing.

Southport Wanderers moved from their previous home on Sussex Road, to a new home at Scarisbrick New Road in time for the 1886-87 season.

It was a large field, enclosed to a height of 7’6″ and big enough to accomodate three matches at once. A Covered grandstand which could seat 140 spectators and a dressing tent were provided. Three cows which grazed on the field withdrew behind the grandstand during matches.

Upon formation of Southport Central in 1888, they returned to the Sports Ground at Sussex Road, returning to Scarisbrick New Road after just one season to take up the ground now vacated by Southport Olympic. The Ordnance Survey map produced in 1894 indicates the location of an enclosure.

After the building of the new Southport Infirmary in 1895 the clock was clearly visible behind the goal and could be used to time the matches.

The Southport Visiter stated that the field was “sufficiently extensive, thoroughly well laid out, capitally fenced and included two excellent pavillions and a covered grandstand”. It was to be Southport Central’s home for the next 16 years.

The pillars and stays of the grandstand and a great deal of the railings around the ground consisted of pitch pine logs, once part of the famous old vessell the “S.S. Great Eastern”. when the ship had been put in the hands of the breakers, Mr Birch, secretary to the Lancashire Agricultural Society helds it’s annual show in Southport, being purchased by Isaac Smith, the Southport Central Chairman. In due course it was taken across to Ash Lane and re-erected there in 1905.

On 15th July 1903 the committee of Southport Central received an intimation that their ground in Scarisbrick New Road, which they had used for the previous 12 seasons, will be no longer available and that they must immediately commence the removal of the grandstand. It was understood that the land was to be used for building purposes although Central were prepared to pay £10,000 for its purchase.

Mr.Yates, the proprietor of Kew Gardens tried to induce them to enter terms there but following problems with the trustees of the property this proposal also fell through It was then decided to meet Sir Charles Scarisbrick and the agent Captain Cross who declared that a ground must be found. A field in Ash Lane belonging to Mr.Rimmer a farmer was Chosen and a surveyor measured the land the club wanted. Finally it was agreed to let the ground to them at a rent of £30 per annum on a 5 year tenancy. The final game was against Darwen where two goals were shared. At the end of the match the spectators joined with the band and sang ‘Auld Lang Syne.’

As can be seen from the overlay image, as the built-up area of the town grew in size with the land between Scarisbrick New Road and Southbank Road covered with houses on Rutland Road, Cumberland Road and Westmoreland Road and there is now no sign of the existence of any Rugby or Football ground having been there. Within the vicinity, circles on the overlay map, Scarisbrick Bowling Club is situated accessed via a snicket off Falkland Road, one of several roads running between Scarisbrick New Road and Southbank Road.
The ground’s relation to Southport’s current home can also clearly be seen.