Skip to content
You are here
Home > Ground > Illuminating times 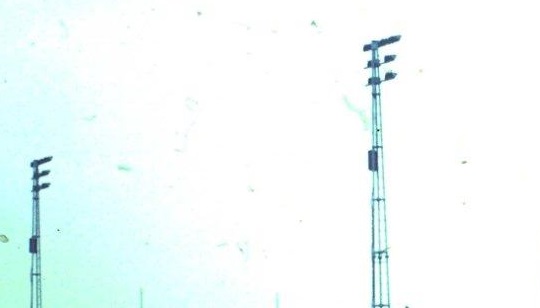 In a fascinating article published last year in the Southport Visiter Michael Braham looks back at the history of floodlit football matches in Southport:

Southport Football Club were among the last Football League Clubs to have floodlights installed in January 1962 and yet the Southport Central Club pioneered floodlit football more than 70 years earlier.

Back on December 31 1889 Central met Higher Walton in a Lancashire League game described in the Southport Visiter as a “novel football match”. The Scarisbrick New Road ground was illuminated by Wells’ Patent Limelight. The clubs had met a short time previously at Higher Walton but a greater part of the second half was played in semi-darkness so the League officials decided that the match should be contested again at Southport.

A torchlight procession accompanied by a band preceded the visitors in a grand procession to the ground after they had arrived at Chapel Street Station. The artificial light novelty caused the crowd to roll up and there were fully 2,500 spectators were present. Walton were on the pitch shortly after the advertised time of kick-off at 7.30pm but it was fully half an hour before the home team put in an appearance and before the game started it was agreed that it would not be a competitive match owing to the visitors’ objection, so the teams decided to play a friendly game. Higher Walton won the match 2-1. There was no complaint about the lights but the Lancashire League ruled that the conditions were not normal for the game and in any event it had to be replayed. Higher Walton again triumphed in this encounter.
[Editor: Southport’s team was Gee; Dobson, Horton; Hodgkinson, Ackeroyd, Kershaw; Lea, McLaren, Wilson, Fecitt, Barton]

At this time Southport Central had a reputation for lateness. The Southport Visiter reporter was very caustic in his comments about the delayed start. He wrote “The game was announced for 7.30 and about a couple of minutes after that time the visitors made their appearance in the arena. Not so the Central for about half an hour half a dozen players had the presumption – yes, I say the presumption – to keep the spectators standing for 28 minutes on a sodden ground with the rain descending pitilessly. I say it is a downright abominable shame that supporters should week in week out be kept waiting in such miserable weather as we are now experiencing for periods varying from 15 to 35 minutes”.

This was not the end of the Wells’ lights novelty matches. On March 33 1890 Southport visited Bootle on a Monday evening. This time the lights were under the Management of Frank Sugg, one of Central’s full-backs, England Test cricketer and all-round sportsman of his day. Central confounded everyone by winning 4-1.

The Southport Visiter reported: “When the teams faced each other the scene presented to the 5,000 spectators was a very novel and interesting one and the effect produced by the brilliant illumination almost placing one under the impression that the match was being contested in broad daylight.”

At the Football League’s Annual General Meeting in June 1956 Arthur Oakley, the President, referring to a 3% drop in League attendances over the previous season, felt that “a judicious use of floodlight football could be a benefit to the League and it was resolved that in future a League fixture may be played wholly or partly under floodlights if both clubs agree”.

Southport initially rejected requests from other clubs who had lights that mid-winter games should start at 3pm. correctly believing that it would give the opposition an advantage. Then, all of a sudden, they changed their minds and agreed to play the second half of a number of matches under lights. The change of policy brought the club a bit of extra cash. But only three draws resulted for at least three seasons leading to speculation that they might have gained several points from these games had they been played under daylight throughout with better home gates resulting from these results.

When the Football League circulated clubs about a proposed Floodlit Football competition for 1957-58 (which did not in fact materialise) the Directors wrote to the Southport Borough Council Estates Committee about floodlights on the ground.

The Chairman and Vice Chairman of the Committee agreed to meet a sub- committee of Southport FC Directors but nothing further transpired. Len Peet, the highly respected Sport Editor of the Southport Guardian, was clearly sceptical about the idea of floodlights when he wrote in November 1958: “If the folk won’t roll up on Saturday afternoons what earthly use is it spending thousands of pounds (which they haven’t got anyway) on installing such a lighting system? It would simply be madness.”

The view taken by most supporters was that there was a lot that needed doing at Haig Avenue before they started thinking about winter evening games. Nevertheless manager Trevor Hitchen who wanted to provide improved facilities for part time players and amateurs persuaded the Southport Directors to fix lights to the stand and behind the Scarisbrick New Road goal for training purposes.

It was not until the club’s Annual General Meeting in July 1960 that the idea of floodlights were approved. A collection at the meeting raised £23 from shareholders which the Directors topped up to £50. Fundraising got underway when a floodlighting appeal was launched by the Southport FC General Improvements Committee initially under the Chairmanship of Director, Bob Howard. The amounts donated were regularly updated in the Southport Visiter.

Gerry Troy, now Chairman of the General Improvements Fund, and the rest of the Committee could feel justifiably proud of their achievement of making floodlit football a reality.

The lights have remained largely unaltered for more than half a century [Editor: They did undergo some renovation in the summer of 1985 when a number of additional bulbs were added. For some time there had been criticism that they were too dim and the result was seen at the time to be “much improved”]. They were briefly out of commission following the fire and when the new stand was built in 1967 the lights on the Haig Avenue side of the ground were placed on top of it.

When Southport drew Everton in the FA Cup in January 1968 the Toffees objected to playing under Southport’s lights so the game kicked-off at 2.30pm. Nevertheless the lights, which must surely be among the oldest in football, have withstood the test of time.

They may be far fewer than the original 48 lamps today but if the lights could speak they could tell many stories of the great victories, gallant failures and an awful lot in between which makes the Southport Community Stadium such a special place for Southport supporters.”