Skip to content
You are here
Home > Personalities > Ken Hilton 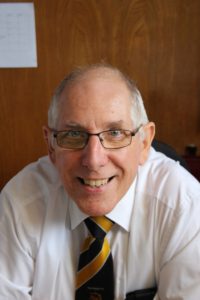 KEN HILTON secretary at Southport Football Club from May 1997 to date having been poached from Skelmersdale, in what some say is the best signing ever made by Southport Football Club. Someone once asked if Ken has any legs as every time you come to the club whether it be 8am or 4pm he is sat behind his desk. The most professional, complete secretary a club could wish to have. Ken likes to stay out of the limelight, a quiet unassuming man who likes to stay in the background and just get on with his job but his efficiency has been a hallmark of his 30 year involvement in Non League football.
When Ken first joined the club, chairman, Charlie Clapham quipped that we would take him to places he would never have dreamed of in non-league soccer’.twelve months later the club were preparing to go to Wembley! In fact Ken’s first years at the club were probably the most hectic he has ever known, Wembley, cup runs and a Lancashire FA Trophy win all meant there was always plenty of administration to complete. Ken was one of the unlucky ones who had to stay behind on the day we went to Harrogate as Runcorn were using the ground and somebody had to be left behind to open the doors, Ken with Tim and Gordon Medcroft were the chosen trio. Whilst 1300 fans travelled to Harrogate Ken, as loyal as ever, catered for the massed 140 who turned up to watch Runcorn.
Ken had two spells as secretary of Skem over six years after having been secretary of Burscough between 1979 and 1991. At Burscough Ken talks about his highlight being in November 1979 when The Linnets were drawn at home in the first round of the FA Cup against Sheffield United but because the police would not allow the game to be played at Burscough the tie was switched to Bramall Lane. The attendance was over 13,000 which justified the concern of the police in staging the game at Burscough and also made Ken’s job easier with a nice cheque to bank.
Thoroughly enjoys his job at Haig Avenue, his best moment at the club, like most was Wembley, he joked before that game ‘People ask me if I will be sitting in the Royal Box, but I’m honestly not sure where I will be because I will be arriving with the team from their hotel. I don’t mind where I sit, it can be by the corner flag if I have to’
He describes his worst memory as being the relegation at Stevenage when ‘it just crept up on us’ and took everyone by surprise and took us all a while to recover.
His job at the club involves all the day to day administration.