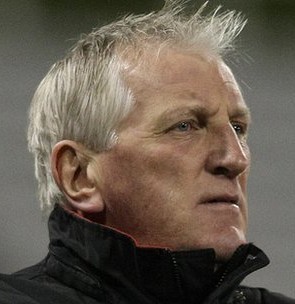 Having been appointed to replace fans favourite Steve Joel, in the January of 1997, taking over from caretaker Peter Davenport, himself overlooked for the position, Ronnie faced a potential banana-skin of a first match in charge, away at Halesowen Town in a first round replay in the FA Trophy.
It was a successful first match in charge with the prolific Andy Whittaker bagging a brace of goals in front of a healthy travelling contingent.
Born in Liverpool in January 1953, Ronnie Moore, was unveiled to the press in a blaze of glory and immediately took the Port on a five match unbeaten run. Despite this promising start however, ‘Port’s season never really took off and come the final whistle on the last day of the season, they found themselves occupying the same position as when Moore had taken over 5 months earlier, an unremarkable 12th. Having played over 100 games and scored more than 50 goals for his beloved Rotherham United, perhaps it was inevitable that he would eventually return. Unfortunately this happened sooner than later, as he vacated his post shortly after the final game of the season, making way for Paul Futcher. Ronnie’s playing history at Tranmere Rovers meant that it was hard for him to become fully accepted as manager at Haig Avenue, particularly amongst those fans with first hand experience of the old football league rivalry.
Ronnie began his playing career with Tranmere Rovers in 1971, originally as a centre-half, before making the successful transition to centre-forward. Moore scored 72 goals in 248 appearances at Tranmere, before making a less successful move to Cardiff City in the summer of 1979.
Lasting little more than a season at Cardiff, he moved on to pastures new with his third club Rotherham United, before moving full circle, via Rochdale, and returning to Tranmere, retiring in 1989.
Having also briefly managed Tranmere Rovers (1987) during his last spell as a player, Ronnie’s occupancy of the managers hot seat at Rotherham was to last eight very successful years, including numerous promotions, before finally leaving in 2005.
Joining Oldham Athletic soon after, he steered The Latics away from the drop zone in his first season (2004/2005), and took them to a respectable 10th the following. However, financial troubles at the Boundary Park club, ultimately led to Ronnie being relieved of his position.
Once again Ronnie finds himself back at Tranmere Rovers, having been appointment first team manager in the summer of 2006. He has brought his Tranmere side to Haig Avenue on a couple of occasions since leaving the Haig Avenue hotseat.