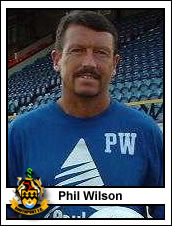 Replacing Mark Wright was always going to be an unenviable task. A high-profile manager, a tough act to follow, and the arrival of his successor triggered a period of decline.
Installed in May 2001, Phil Wilson’s appointment was part of a new direction taken at Haig Avenue. Sadly, the journey quickly culminated in disaster.
With finances tight after Wright’s spending, the new approach was supposed to be one of prudence. As a string of established names departed, the arrival of Wilson was accompanied by the launch of the club’s youth development set-up; the aim being that home-grown talent would gradually be nurtured into the first team.
Although he did not oversee relegation from the Football Conference in 2003, Wilson’s tenure will be remembered for sending Southport down the slippery slope towards catastrophe.
Formerly a player with Northwich Victoria, Runcorn and Altrincham amongst others, he had a solid Non-League pedigree, arriving at Haig Avenue fresh on the back of masterminding his second Northern Premier League championship with Stalybridge Celtic. His assistant, Peter Ward, had won the same league as manager of Leek Town after Wilson had laid the foundations before taking charge of Northwich.
Although Wilson’s 86-match reign embraced some memorable highs, a relationship with the Haig Avenue supporters never materialised. He wasn’t the easiest manager with whom fans could establish a rapport, while the style and standard of football did not endear him to the crowd. The players he recruited – many of whom he had managed at Stalybridge and other clubs – did little for his popularity, as did his allegiance towards them.
The peak of the Wilson era was undoubtedly the FA Cup First Round win against Notts County, then of Football League Division Two, in November 2002, highlights of which were televised as the main feature on Match of the Day. Sitting fourth in the Conference after an excellent start to his second season, Wilson’s side came from two goals down to win 4-2 in classic cup fashion.
His first campaign in charge had ended with a hugely disappointing 15th-place finish, despite the fact that his Southport team suffered only two more league defeats than in the previous season under Wright. Although they held a respectable defensive record, Wilson’s side lacked a cutting edge and became one of the division’s draw specialists, playing out fourteen stalemates.
A 5-0 home win against Leigh RMI in January 2002 was the climax of a run which saw Southport lose just once in twelve matches and took them into fourth position. But the Sandgrounders faltered badly and the 2001/02 season ended with the worst spell of the manager’s tenure, losing seven of the last ten matches. A crowd of just 737 for the final game of the season at home to Forest Green Rovers was an indication of the prevailing disenchantment.
With the introduction of a second promotion place to the Football League, Southport lay on the fringe of the Conference play-offs for the first half of the 2002/03 season. But instead of acting as a springboard, the win against Notts County was Wilson’s penultimate win, as a run of three points from nine matches prompted his departure by “mutual consent.”
When Wilson left on 27th January 2003, the Sandgrounders were in ninth place, but the continuation of a disastrous slump resulted in relegation. Who knows if Southport would have faced the drop had he not departed?
Wilson’s first job after leaving Haig Avenue was as manager of Lancaster City, who he joined in the summer of 2003 and led to qualification for the inaugural Conference North. He resigned in December 2005 to take charge at Barrow, where he stayed until being sacked in November 2007. A month later, he was appointed first team coach at struggling Conference Premier side Droylsden and Barrow went on to be promoted to the Conference Premier Division.