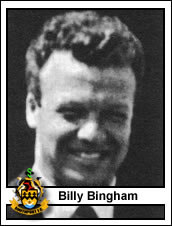 In June 1965, with interest waning fast, no money to buy new players and the manager and trainer sacked, Southport were in dire straits when the board advertised the position of trainer-coach. Billy Bingham, the former Sunderland and Everton winger who, at the time of his appointment, had won a record number of Irish International caps, proved Southport’s inspiration. His role changed to manager in October. He brought the best out of his players and created team spirit and a professional approach which had long been absent.
In his initial season, and for the first time in 34 years, Southport resumed their giant-killing role by reaching the fifth round of the F.A. Cup. Bingham, soon appointed team manager on a three-year contract, introduced ‘method’ football to the Fourth Division; though not popular with spectators, it certainly achieved results. The following season, 46 years after being elected to the Football League, Southport at last won promotion as Division IV runners-up.
Bingham’s managerial ability combined with his promotional flair presented a totally new outlook at Haig Avenue and undoubtedly gave the club a new lease of life. By February 1968 Southport were holding a comfortable mid-table position in Division III and had again featured in the third round of the F.A. Cup when the news broke that Bingham had accepted a managerial appointment with Plymouth Argyle. There was both sadness and anger at the manner of his departure, for he had only recently agreed to a new three-year contract which would have made him one of the best paid managers outside Division I.
Bingham did not have a particularly successful time at Home Park; he was unable immediately to save Plymouth from relegation to Division III and subsequently failed to regain the club its former Division II status. After spells with Linfield and the Greek national side, he had been Northern Ireland’s team manager while at Haig Avenue, he returned to England as manager of Everton in 1973. With Liverpool doing so well his job at Goodison was a struggle and he was sacked in January 1977. He had one further season as Mansfield Town’s manager, followed by a short period managing Salonika in Greece. Bingham was later re-appointed Northern Ireland manager and they met with considerable success in the 1982 World Cup, reaching the second stage after beating the host nation, Spain.
Billy Bingham, who was born in Belfast on August 5th 1931, was briefly on the board of Southport Football Club and more recently has been appointed a director of Blackpool F.C. He still lives in Southport.

Bingham took over as manager in May 1973 at Everton and finished seventh in his first season. He brought in players such as Martin Dobson and Bob Latchford. Everton seemed likely to win the title again in 1975, but only won once in the last five games finishing fourth. In 1975-76 Everton finished eleventh but a run of eight league games without a win resulted in Bingham being sacked in January 1977.

Bingham managed Northern Ireland in two spells and it would be during the second that he would be best remembered as a manager. He led Northern Ireland to the World Cup finals 1982 and despite a limited squad with only one or two genuine world class players at his disposal Bingham’s team stunned the host nation, Spain with a 1-0 victory which is still shown on television and spoken about in Northern Ireland with the same reverence as if they had won the tournament.

Bingham’s trademark as Northern Ireland manager harked back to his days as a player at the 1958 World cup when team captain Danny Blanchflower famously quoted that the idea was to equalise before the other team scored. Northern Ireland regularly punched above their weight under Bingham with a string of single goal victories over top European opponents, including home and away against West Germany, characterised by their ability to nick a goal in the first half hour and then defend as if their lives depended on it for the victory. They qualified again for the World Cup finals 1986 but Bingham’s team was an ageing one and after failing to reach the 1990 and 1994 finals he stepped down.

Amongst the numerous awards and honours granted to Bingham, he was made an MBE for services to football in 1981 and the Professional Footballers Association made him the recipient of their annual Merit Award in 1994 for “outstanding contribution” to the game. This latter makes him one of just 34 individuals so honoured since the award was inaugurated in 1974, putting him in the company of such managerial luminaries as Bill Shankly, Bob Paisley, Brian Clough, Sir Alex Ferguson and Sir Bobby Robson, as well as playing greats like Pele, Sir Stanley Matthews, Sir Tom Finney, Sir Bobby Charlton and fellow Ulsterman George Best.

Bingham also received FIFA’s “Centennial Order of Merit” in 2004, to mark 100 years since the founding of the world governing body of football.