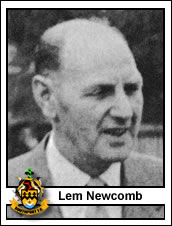 One of the most well-loved players and managers ever to have graced Southport Football Club, this cultured wing-half became a big favourite with the Haig Avenue crowd until he hung up his boots early in World War II. After the war he became the manager of Marine before coaching the Southport ‘A’ team in an honorary capacity. He also helped Ray Minshull for a brief period as a scout at Wigan Rovers.
To commence a managerial career thirty-five years after starting in professional football is exceptional but then Lem was almost unique amongst sportsmen. He was a gentleman both on and off the field and in the managerial chair he relied upon encouragement and understanding rather than a bullying or domineering attitude. He was greatly appreciated by the players, almost all of whom have regularly avowed that they have never played under a finer manager.
Lem was Southport’s team manager for three and a half seasons, taking over after four disastrous years. Few greater challenges existed in the game but Lem’s side played some of the most attractive football ever seen at Haig Avenue and, significantly, each of his three full seasons showed a profit. When, in January 1964, ill-health forced Newcomb to abandon his job, Gordon Hunt was appointed acting-manager after the directors had decided that ‘in view of the club’s financial position, Lem Newcomb’s wages should cease until he is fit to resume duty’. Indeed Lem had not always enjoyed one hundred per cent backing from the board; big, goal-scoring centre-forward Frank Lord was among the players Newcomb missed because the modest amounts needed to secure their services were not forthcoming.
Lem Newcomb died on July 3rd, 1964. As Len Peet (`The Scout’ in the Southport Journal) reported: ‘There are precious few characters of his calibre in football and the game is all the poorer for the loss of such a highly respected, genuinely capable figure who ought really to have been appointed club manager many years earlier’. Scores attended the funeral service at Southport Crematorium where the Reverend R.H. Percival expressed the thoughts of many when he opined: ‘Southport is very much the poorer by his death’.