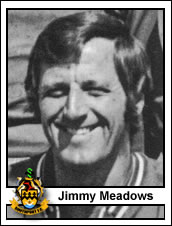 Shortly after Alex Parker’s departure his youth policy was totally abandoned with the appointment in his place of Jimmy Meadows. Meadows had retired from playing after the bad leg injury he suffered in the 1955 Cup Final and had joined Manchester City’s training staff before becoming trainer-coach at Stockport County and steering them to the Fourth Division championship in 1967. He was also associated with Bury (as assistant manager), Blackpool and Bolton Wanderers, although at the last named he was only in charge for eleven weeks.
Having previously been an unsuccessful candidate for the job at Southport, the man who had started his League career at Haig Avenue at last took over the managerial duties in June 1971. He inherited only seven players, yet within two seasons he had clinched the Fourth Division championship, thus emulating the feat of Lawrie McMenemy, who also guided two clubs (Doncaster Rovers and Grimsby Town) to the same title. When Meadows congratulated Liverpool boss Bill Shankly on winning the First Division, the latter sportingly shrugged it off with the words ‘That was nothing, son, you’re the one who really deserves the praise’.
But things turned sour the following season and Meadows was sacked on December 30th with Southport just one place of the foot of Division III. He had won the championship on a shoestring budget but the directors, instead of allowing him to strengthen the side, had sold Chris Dunleavy to Chester for k12,000 and used the proceeds to meet outstanding debts.
Re-appointed manager of Stockport County in May 1974, he met with little luck in his second spell there; neither could he prevent Blackpool’s relegation to Division III when made caretaker manager towards the end of 1977-78. He subsequently left the English scene and managed abroad, notably in Qatar, but on returning to England some years later was unable to obtain a satisfactory position and his involvement was restricted to assisting Bobby Charlton at his coaching school in Manchester. He died almost twenty years to the day after his dismissal from Haig Avenue, alone in a flat in Didsbury. It was a tragic end for one of Southport’s greatest heroes.