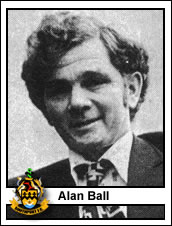 After a number of years in non-League football management Alan Ball was appointed manager of Halifax Town in 1967. In his first full season in charge `The Shaymen’ won promotion for the first time in their history as Division IV runners-up. His publicity-seeking persona ensured that he was rarely out of the news and he took Preston North End to the Third Division championship in his first season at Deepdale. He maintained Preston’s Second Division status until he was sacked in February 1973.
He was appointed honorary manager at Southport following the dismissal of Jimmy Meadows, but his subsequent comings and goings heralded a particularly unsettling time for the players; they never knew from one day to the next who would be in charge. His very appointment created a boardroom rift which saw the resignation of directors Leon Rapaport, Gordon Gaskell and Arthur Horrocks. After only six weeks Ball disappeared to a coaching job with I. F. Saab in Sweden, leaving the hastily appointed Matt Woods as acting manager. Two brief visits apart, he was not seen again until mid-September (1974); when he returned to Sweden in March 1975 (to coach I. F. Sirius) it was Jimmy Melia who took up the reins.
Despite everything, including criticism from supporters over his defensive style of play, Southport finished 1974-75 in a position of mid-table respectability; but a subsequent furore over his non-return in July almost caused another boardroom split when chairman Tom Robinson, a friend of Ball’s, granted him a two week extension.
The wrangling ended with Alan Ball’s dismissal on July 28th, 1975 after which he returned to Halifax Town; but his second spell was far less successful and culminated in their seeking re-election in 1977. In January 1982 he was killed in a car accident in Cyprus where he had accepted a short-term coaching post, prior to resuming with Vester Haringer in Sweden.