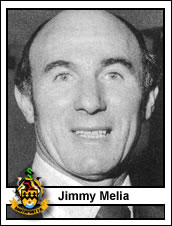 After a distinguished playing career at Liverpool, Wolverhampton Wanderers and Southampton he became player-coach at Aldershot and then player-manager at Crewe Alexandra. He assumed control of the Southport team for the final eleven games of 1974-75. Although weakened by the departure of three players to the United States, the side still managed to collect a point a game and finished on a high note by winning the Liverpool Senior Cup.
Melia, officially appointed as Alan Ball’s successor on July
31st, was in charge for just two months before resigning to take up a coaching post in Sharjah on the Persian Gulf. He left Southport at a time of crisis with the club at the foot of Division IV and gates at an all-time low. The club were considering going part-time and the players’ confidence was not helped when they learned of this possibility through the press.
Afterwards Jimmy Melia scouted in the U.S.A. and at Brighton and Hove Albion, with which latter club he served as manager between January and October 1983; during this time he led the Seagulls to an unlikely F.A. Cup Final appearance against Manchester United. He then had a spell as manager of Beleneses in Portugal and a four month period in charge of Stockport County before returning briefly to Haig Avenue as acting manager during the early days in the Northern Premier League. He was born in Liverpool on November 1st, 1937.