IT was a tale of two penalty kicks at the Pure Stadium as Kidderminster Harriers dropped their first point of the season in a combative draw with Southport.

“There’s two ways of looking at it,” said Kidderminster Harriers manager Russ Penn. “I’m disappointed because we’ve come in at half-time 1-0 up and in total control of the game but then ending the game I’m delighted with a point.

“Full credit to Southport they did exactly what it says on the tin and they’re proud of it and I’ve got full compliments for them. Liam Watson’s got his side well drilled.”

Southport assistant manager Jon McCarthy said: “We think we’ve exerted a lot of pressure on them there, our keeper barely had to make a save all game.

“The supporters have been really good and can see what we’re doing. We want to win the second balls and make it really difficult to come here. I think Gloucester and Kidderminster will be happy to come away from here with a point.”

Harriers had to wait only seven minutes to take the lead after Caleb Richards’ cross ricocheted off Jack Bainbridge’s upper arm with referee Kristian Silcock pointing to the spot. Ashley Hemmings, who scored for Harriers last week at York stepped up and slotted into the bottom corner, sending goalkeeper Cameron Mason the wrong way.

Southport had a chance to level on the 15 minute mark as Marcus Carver beat Joseph Foulkes on the left-wing before cutting the ball back to an unmarked Niall Watson on the edge of the six-yard box, but keeper Luke Simpson produced a superb reaction save to deny Watson.

Simpson was almost to blame for a Southport equaliser six minutes later as he spilled a Jack Doyle cross at the feet of Chris Doyle under pressure from the centre-half. Chris Doyle then poked the ball goalwards but Geraldo Bajrami arrived late on the goal-line to clear and save the keeper’s blushes.

Port’s perseverance paid off 20 minutes before time as a long throw caused confusion before hitting Keith Lowe’s hand with the referee pointing to the spot once again. Marcus Carver stepped up to power in his third goal of the season and his second from the penalty spot. 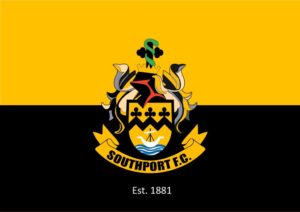