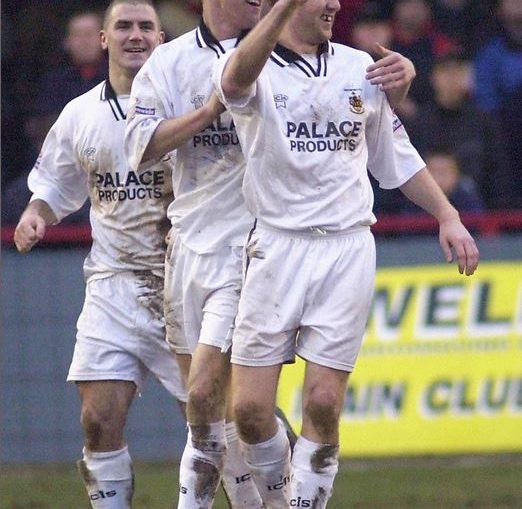 On this day in 2005, it was first v second in the Conference North when Southport visited top of the table Kettering Town’s Rockingham Road ground.

Kettering manager Kevin Wilson was bullish about his sides chances before the game and in a newspaper interview had boldly claimed that they would increase their lead in the table to 8 points with a win. Pointing out that Southport would have to hit championship form of 2 points a game in their four games in hand to catch them, Liam Watson had been handed all the ammunition he needed. Liam recalls “I got about 10 copies of the interview and put it up in the dressing room. I made every player read it before the kick off. The rest is history”.

Changing to play an attacking 4-3-3, it didn’t take the Sandgrounders long to dispell any hopes the Poppies had of extending their lead. Syd Pickford opened the scoring after just 4 minutes. Kettering were reduced to ten men 6 minutes later for a professional foul and Liam Watson’s Southport were about to pull off the shock result of the season. Steve Daly made it 2-0 on 37 minutes and Pickford made it 3 shortly after the restart. Sensing blood, Kevin Lynch made it 4-0 on 68 minutes and Kevin Leadbetter left the home support utterly demoralised 60 seconds later, with some already heading for the exits.

The result equalled Southport’s joint highest away win since their exit from the Football League and is one of the most memorable in any championship season.