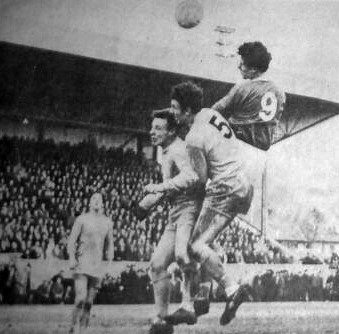 Southport played one of their most famous games at Haig Avenue on this day in 1968.

The club’s first season in the Third Division brought increased attendances in the League and saw the erection of the new main stand following the fire.

Following their earlier victory over Runcorn the draw against Everton in was something dreams are made of – a local derby against one of the Lancashire (or Merseyside!) giants.

Southport took the decision to capitalise on the great local interest and increase gate prices. Having originally wanted to charge £1 for the stand and 7/6 for the Ground, Everton, still smarting from Southport’s refusal to switch the tie to Goodison Park, considered the prices too steep and took the dispute to the FA. Prices of 15/ for the seats (compared with 8/ for the Runcorn tie) and 6/ for the ground were settled upon.

The ground capacity had been set at 19,000 under police advice, but applications for tickets would have sold it three times over. In the end, the attendance recorded is Southport’s second-highest behind the 1932 fourth round replay against Newcastle United.

Six of the regular Southport team had started their careers at Goodison Park, and so too had the manager Billy Bingham who had won the first division with the Toffees during his spell there as a player.

The Everton line-up included two players who, only 18 months before, lifted the World Cup with England. It was a side that had been assembled for nearly half a million pounds, which for 1968 was a significant sum. Almost £200,000 of that had been spent on one of those 2 world cup winners, Alan Ball, the son of the former Southport player (and manager) of the same name.

Speaking to the Southport Visiter on the fiftieth anniversary of the game, club statistician Geoff Wilde recalled the day…

“There was great excitement about the fact we were playing Everton. A lot of people were disappointed not to get a ticket, Everton were given so few out of necessity, and there were fears that thousands of Everton fans would turn up and try to get in.

“It was packed on the terraces but there were no problems. 18,795 was the attendance that was put out on the day but it is thought that there were more inside the ground.

“The Everton goal came late enough to give us hope of the bonus of a replay. By that time, we weren’t so much worried about scoring ourselves as holding onto a draw so we could get a big pay-out. Joe Royle got the goal that spoilt it all in that respect.”

“We were playing well at the time and I think the players felt we could beat them,”

“We had such a strong team that even Alan Spence, our record Football League goalscorer, could not get a start.

“The aim was to destroy Everton’s rhythm which meant we didn’t play in the same way we had been doing that season. We were playing really good, studious football, and we wanted to see us beat Everton on merit by outplaying them.

“Eric Redrobe was assigned the role of being the battering-ram against their goalkeeper, Gordon West. It was a role that Bingham had given to him, not just in that game, and it is a job he confessed years later that he did not relish.

“As a result, the Southport supporters felt that we didn’t get the match that we were expecting. That was the one disappointment.

“Coming after what we had been through, the Bingham era stands out. We couldn’t believe it was all happening.

“We referred to the Southport teams from that time as the ‘Golden Boys’ and it wasn’t just because of the colour of their shirts.”

Player Colin Alty also recalled to the Liverpool Echo “It was a fantastic game and I really thought we should have won it. Stuart Shaw managed to put in so many crosses for us and we should have done better with them than we did. He tore Ray Wilson to shreds and Ray ended up being substituted. “

“They scored with the first really good chance they had but that was First Division quality. They had some good players, Colin Harvey was brilliant and they just seemed to have that space to work in.

“The occasion was brilliant, it couldn’t have been any better. The atmosphere here when it is full is great and getting more than 18,000 was fantastic. The players got here about three hours before kick-off, the TV cameras were in the dressing room, Police were on horses outside, it just wasn’t what were used to.

“Overall, we couldn’t have done any better than we did. They scored the only goal towards the end of the game. Howard got a cross in, Joe managed to get half a yard and it was a goal. It was a good header from about the penalty spot which went into the bottom corner.”

Alex Russell added “Both teams used to be quite friendly with each other,
There were quite a few of us who played for Everton as youngsters and we used to have a drink with some of their players on a Tuesday night.

“We all came from big clubs. I knew Howard because he grew up in the north east like me and Colin Harvey was one of my best mates when we were at Everton.

“The build-up was good. There was a lot of talk about possibly switching the tie and in the end it was a surprise they played it here.

“The message was to keep it tight and we did a bit of man-marking. They had a good midfield: Ball, Kendall and Harvey, and our midfield lads were given a man each to mark. I didn’t particularly agree with it but you had to do it. They were strong lads and their first touch was always good.”

“We were on a good run at the time and we thought we could beat anyone. I enjoyed the occasion but I was a bit disappointed with the way we played. I would have loved the chance to play at Goodison Park and a replay was what we wanted.”

Eric Redrobe gave his unique take on the game during an interview with the Lancashire Evening Postin 2009.

“On the day we played Everton in the FA Cup, I caught the 359 bus from Wigan to Southport,” he recalled.

“I didn’t have a car, and the bus stopped at the end of my road. I got on and the driver said, ‘Blimey. You’ve got a tough one today, Eric. Have you got any spare tickets for the match?’

“Southport would get 5,000 for a home game, but when I got to the ground the place was jumping, with fans in trees and people stood on rooftops.

“The game started and there were a few naughty tackles flying in, and then I clattered Everton’s goalkeeper, Gordon West.

“It wasn’t malicious, but West was lying on the turf screaming and shouting – and the Everton supporters were baying for my blood.

“The referee called me over. ‘Mr Redrobe,’ he said, ‘I’m going to book you, because if I don’t I will not get out of this ground alive and you will be lynched by those mad Evertonians.’

“After the game, I decided to wait for a few hours for things to calm down, and caught the train home.

“I turned up at Southport station, nipped into the bar, and the place was full of Evertonians.

“I kept my head down, ordered a drink and sat down in the corner. Suddenly this huge Everton fan loomed over me and growled, ‘Hey la’. Aren’t you that Southport so-and-so who smashed up our goalkeeper.’

“I told him I worked in a furniture shop on Lord Street. Thankfully, he believed me, but was I glad to see the Wigan train pull in to the platform a few minutes later!”

In February, just weeks after the game, came the announcement that Billy Bingham had accepted a managerial appointment with Plymouth Argyle. It was a shock that took time for supporters to recover from. In truth however, Bingham had always been destined for greater things. He had already been appointed Northern Ireland team manager and had been combining his duties very successfully and he had virtually rescued Southport from the point of extinction and taken them to a very respectable Third Division side with national notoriety.

Just five short years after his tussle with Everton in the FA Cup as Southport manager, he would take up position as the man in charge of his opponents replacing Harry Catterick at Goodison Park.