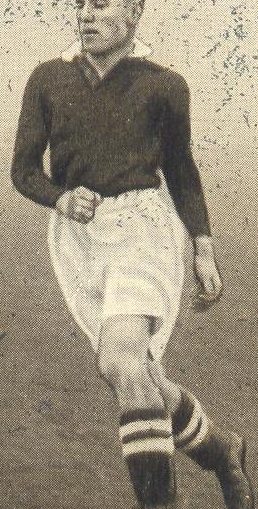 Wishaw, Lanarkshire born centre forward Archie Coats began his football career with Bothwellhaugh Athletic and he played for Wishaw Juniors before joining Portsmouth, where he was on their books but failed to graduate to the first team. He was scoring goals for Bangor in the Irish League before being spotted by Dundee in 1934, for whom he was the club’s top scorer in 1934-35 with 30 goals and in the two seasons thereafter with 28 and 25 goals.

He was described at the time as “a great favourite of the Dens Park supporters” and “of the roving, energetic type, he is a difficult handful for any centre half back, and shoots well with either foot, nor is he afraid to try a long shot when further progress is barred.” He scored more than 150 goals in his Dundee career and is the club’s second highest ever goalscorer behind Alan Gilzean. He was selected to represent The Scottish League in a 3-2 victory over The Irish League in September 1937.

Frequently referenced in newspaper reports as “Coates”, he was a regular guest for Southport during the war. Upon its conclusion he joined Third Lanark, and subsequently Abroath before joining the Dundee United coaching staff.
His son would later turn out for Dundee United as a goalkeeper.