Often incorrectly referred to as "Lol Abrams", he was educated at Churchtown School whom he assisted to win the Unwin Challenge Shield in 1903 as Champions of Southport Schools. He was one of the youngest players ever to turn out in the F.A. Cup when he led Southport Central's attack at Watford in the 4th Qualifying Round on 11 November 1905 aged just 16 years 181 days. He was signed as a professional when only 16 and was one of the finest players Southport ever produced. He became better known for his work as a left-half having moved to that position whilst at Stockport County. He was unlucky to miss an F.A. Cup final appearance for Chelsea in 1915 owing to a twisted knee sustained in the previous round against Everton, after playing in all but 7 of their League matches. He also played in a `Military International' at Anfield, scoring one of England's goals in a 4-3 win over Scotland. He returned to Haig Avenue in the early days of the Third Division when he captained the side. Lol worked as a painter and decorator in the town for many years. 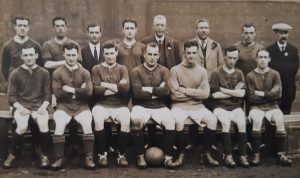