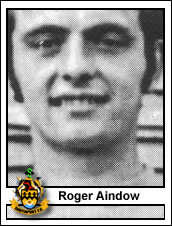 He played for Crosby and Litherland School Boys as a goalkeeper and was spotted by local scout Verdi Godwin (q.v.) who took him to Black-
pool. A sound defender, he joined Southport initially as an amateur and

gave good service in the centre of the defence. He made his first team
debut on I January 1968 against Liverpool in a Lancashire Senior Cup-tie when Southport were fined for playing their reserve team despite only losing 2-1 to Liverpool\'s Central League side. He was a regular member of the Northern Floodlit League team before making his League debut for the club. He was involved in the excellent defensive run at the end of 1968-69 when the side conceded only one goal in 6 consecutive games. He scored the first of his four league goals against Newport County whom Southport thrashed 6-1 in August 197o after a goalless first half. He has lived in Formby, where he works in the motor trade, since he was eleven.