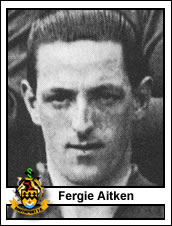 Fergie won a Scottish Junior Cup winners medal with Petershill and the following season was a member of the Benburb side that won the Glasgow Cup. He was then a left-winger who was moved to the right flank by Bury. An ever-present with the Shakers in 1919-2o, he was transferred to Blackburn Rovers for a fee in excess of Ł2,000 — then the record fee that Bury had received for one player. He was described by the Lancashire Daily Post Football Handbook as being 'a delightful footballer with an extensive repertoire of moves'. His speed (as befitted a Powderhall Sprinter) and ball control made him one of Southport's best wingers during the 1920s. He was an ever-present in 1924-25 on the right-wing along with his namesake Jock Aitken on the left. His career ended prematurely at Bradford when he was recalled too soon after pulling a thigh muscle. Retiring from footballs worked on the trams in Glasgow being promoted to Inspector. He maintained his involvement with football by scouting for Bolton Wanderers for a time in the 1950s. He continued to be very active, being a keen bowler into his 10th decade.