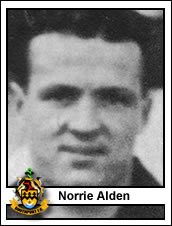 This Caerphilly raised player worked for several years as a miner, only abandoning the pits when he joined Liverpool after scoring 40 goals for Merthyr Town in the Welsh League; but he had to be content with Central League football and badly injured himself playing for Liverpool
reserves at Villa Park. His only league appearance with Oldham coincided
the latics first ever Third Division North fixture. His opportunities
limited at Haig Avenue - he was the incumbent at centre-forward
when Joe Patrick arrived - yet a contemporary report of a Midweek League fixture suggested that 'if he would impart a little more devil in
game the club would have a ready made winger fit for first team 'duty'. He finished his football career with Hereford and worked at Bulmers for a number of years, though he assisted the Ministry of Defence at the local munitions factory during the war. He was still working part-time when he died of a heart attack at home in the early hours of the morning.

If you can provide any further information please contact me
Season: 1936/1937 [Back to Player Stats]
The player made an appearance in the following games: