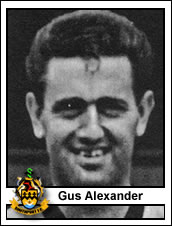 DOB also reported as 8/2/1934.
Burnley Scout Jimmy Scott spotted him playing for Arbroath Youth Club and he joined the Turf Moor ground staff at 16. His National Service (1952-54) took him to the Suez area and Cyprus, where he played with the British Army. He was signed from Burnley at a four figure fee but failed to come up to expectations. Although he often showed neat touches and good ball control he never really fitted into the scheme of things. After being placed on the transfer list because he was dissatisfied with reserve team football he joined Workington in exchange for Tommy Kinloch. He later joined York City in another exchange involving Tom Brownlee. His overall return of 5 goals in 70 League games suggested that goalscoring was not his strong point. He settled in Cumbria, working in the steel industry for 14 years and thereafter for a printing firm from which he took early retirement in the early 90s.