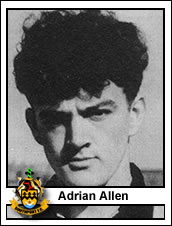 As a teenager Adrian was on the books of Preston North End prior to being called up for National Service; he served as a Royal Naval Officer in the Korean War but found time to represent the Royal Navy and Combined Services at soccer. On returning to the U.K. he entered college and joined Southport as an amateur. After 3 appearances with Southport `A\' in April 1954 he began the following season with 3 Reserve games and in less than a fortnight made his footballing debut against Oldham when he was marked by George Hardwick, the former England Captain. He played for the County at schoolboy, junior and senior levels and in anuary 1955 was chosen to play for Lancashire against North Riding. Although lacking in weight and height he showed a rare turn of speed and an ability to send accurate passes across the goal from the dead ball line. In his 6 League games Southport gained 4 wins and 2 draws. After leaving Southport he turned professional and was a regular goalscorer in the Lancashire Combination. Outside of football he followed an academic career; a graduate of 3 Universities � Manchester, London and Durham � he taught in Secondary Schools in the Preston and Manchester areas prior to being appointed Headmaster of a Comprehensive School in Sheffield where he has lived and worked for the last 20 years. Still keen on football, he plays regularly for an over-40s side and has no intention of giving up the game in the forseeable