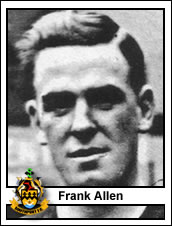 Signed by Jimmy Commins on 3 separate occasions, Frank was a versatile performer who played equally well at wing-half or inside-forward, making Football League appearances in all. At Barnsley he moved from Right-half to inside-forward to accommodate Dai Jones (q.v.). Although never regarded as a prolific goalscorer, he achieved his best return with New Brighton where he scored 19 of his 38 League goals including a first half hat-trick against Southport when the Rakers scored 5 goals in the first 25 minutes on 7 April 1934. He was signed a third time by Jimmy Commins at Barrow where he appeared along with ex-Southport players Ralph Hills, Ossie Littler, Tommy Moon and Joe Wilson. He actually played with Jack Little (q.v.) and Peter McPherson (q.v.) at Le Havre where he also coached local schoolboys, returning after 2 years in preference to becoming a naturalised Frenchman! In later life he was heavily involved in golf and flower shows, though a ceased hip, the legacy of an early pit injury, was still a handicap. A widower for over 20 years, he died of pneumonia in hospital at the age of 88.