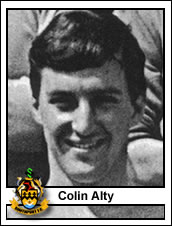 Arguably Southport’s most versatile performer, this local product was a member of the 1959 Southport Schoolboys side which won the Lancashire Schools Cup. He was Willie Cunningham’s first signing, having been with Preston North End since leaving school without making their League side. During his 6 years at Haig Avenue he represented the Club in every position except goalkeeper, a role he once fulfilled with Preston North End ‘A’. In 1965-66 Billy Bingham moved him to centre-forward to take the weight off Alan Spence and he scored many vital goals especially in the club’s renowned F.A. Cup run. His dying seconds winner at Ipswich is well documented elsewhere. His best season at Haig Avenue was the promotion year of 1966-67 when he missed just one match and, switching to centre-half in mid-season, was the first winner of the ‘Player of the Year’ award. His brother Alan was a popular goalkeeper in the early N.P.L. days. Since retiring from football Colin has become a most accomplished squash player and still resides in Banks.