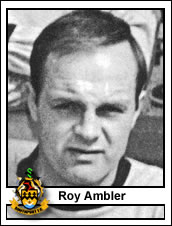 He represented Yorkshire Boys as well as the North of England Schoolboys where he played in the same team as Bobby Charlton. He showed his best scoring form with Wrexham (35 games, 15 goals). He helped to make footballing history in March 1962 when he was one of 3 players to score hat-tricks in Wrexham\'s 10-1 win over Hartlepools United. He could not reproduce this form at Haig Avenue, failing to find the net in League appearances, although he did score the winning goal in the Liverpool Senior Cup semi-final against Tranmere Rovers and hit the bar in the drawn final against Liverpool. He was the Reserves\' top scorer with 17 goals in 3o Combination games. He wound up his career as Reserve Coach with Bradford and turned out on occasions in their Northern Premier League team following their failure to be re-elected. He later scouted for West Bromwich Albion for a number of years, working as a sales representative selling kitchen and bedroom furniture.