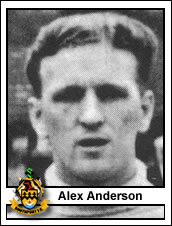 Although he had been out of the game during the earlier part of the season until signing for Southport on a 2 months' trial in November 1949 he made an instant impression on his home debut in the Midweek League against Blackburn Rovers. One reporter wrote 'It was a classy exhibition - he handled the ball cleanly, positioned perfectly, came out correctly and kicked a very good ball. Time and again he cleared straight to the toes of the winger'. Anderson had joined Hearts from Scottish junior football in 1941 and subsequently appeared regularly in the League side before going into the forces and serving in Ceylon with the Royal Marines.
After being demobilised he could not regain his place and joined Rochdale, appearing in 4 Northern Section games in 1947-48. While at Dundalk he represented the League of Ireland v. the Scottish League at Ibrox and also won an F.A. of Ireland Cup Winners medal. In the days when only green was fashionable for 'keepers he became notable for wearing a yellow jersey (the one he had worn for the League of Ireland) in all his games. He married a Bolton girl in September 1948 and settled in Southport working as a painter and decorator. He -died at home in Ainsdale after a long illness when only 62.