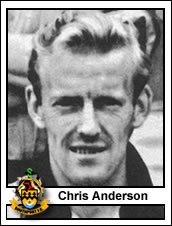 Chris Anderson was a slightly-built, fair-haired winger of tremendous potential whose career was undermined by weaknesses of both character and temperament. The third of four sons of a Scottish miner, he joined Blackburn Rovers after National Service in the Royal Artillery and made 13 Second Division appearances after being signed from Lochore Welfare. He made his Nelson debut against Southport Reserves when still on Blackburn Rovers' retained list at over Ł3,000 and later played his first match for Stockport County against Southport. He did not score for Southport in his 28 League and 3 Cup games in the first team nor in the Lancashire Combination and 2 Combination Cup games. Indeed his only F.L. goal was Blackburn Rovers' winner in the last match of 1950-51.
His suspect temperament saw him sent off while playing for Stockport County along with Accrington Stanley's Dave Musgrave (q.v.) and again when playing under permit for Highfield Athletic in themourn Combination after an incident with the referee. His drinking, extra-marital affairs and general shiftlessness took him through a succession of jobs and ultimately to a life of penury. Having suffered the amputation of a gangrenous leg as well as a severe stroke he was as a shadow of his former athletic self and was in permanent care until his death in Derby in 1996.