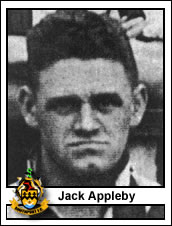 A clever forward with an inexhaustible store of energy, this son of a Durham coalminer and cousin of Tommy Bell (q.v.), came to Southport from Army football and scored in the opening Reserve game of 1932-33 at Lancaster Town; immediately promoted to the League eleven, he showed great promise in his first season, working the ball cleverly and proving himself a valuable opportunist. Indeed, Wolves made a sizeable bid for him which was turned down. A cartilage operation on his knee kept him out of the side for much of 1933-34. A hard-working two-footed player, he was not seen to best advantage in 1934-35; though loaned to
Clitheroe in January 1935, he returned 2 months later to see out the season at outside-left. By 1937 he was reported to be playing non-League football back in his native North-East and working on making bricks for Seaham Colliery. He captained their team to win the Monkwearmouth Charity Cup in 1938-39. After the breakdown of his marriage he was called up during the Second World War and rose to the rank of Sergeant-Major. Around 1948 he moved down to Watford and, having assisted Watford F.C. as trainer, worked for some years as a gardener with Watford Council. He spent the last 6 years of his life in an old people's home in South Oxhey, where he was popular with both residents and staff.