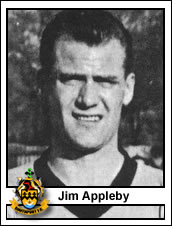 A miner from leaving school, he avoided National Service by registering as an apprentice fitter at a Burnley colliery. At Turf Moor, where he was in digs with Mick McCoy (q.v.), he only had one League appearance followed by just a couple with Blackburn Rovers — the last of which was a 6-1 drubbing at Manchester United. Lem Newcomb signed him the day after Roger Darvell sustained a fractured shinbone at Bradford City. He played in 13 out of 14 League games — missing the home game with Rochdale with 'flu — as well as 3 F.A. Cup-ties but lost his place to Bill McCarthy after being suspended when sent off for arguing with the referee at Tranmere Rovers and pulling a muscle shortly afterwards. Later he was transferred to Chester in a deal which brought Jimmy Cooper to Haig avenue but only managed one appearance there. He played in the Ryhope side which reached the FA Cup First Round Proper for the first time (losing 1-0 to workington) and then managed Horden C.W. when they won the Wearside League for 4 successive years; he also took them into the Northern League. He lives in Peterlee.

If you can provide any further information please contact me
Season: 1961/1962 [Back to Player Stats]
The player made an appearance in the following games: