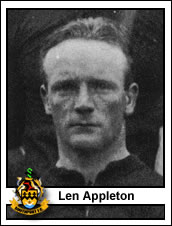 Len Appleton was a quiet, unassuming, fair-haired winger who lived all his life in the Bamfurlong area. A very good runner, he used to compete in handicap races. Apart from a brief spell with Bolton Wanderers in war-time football he played for Blackpool for 6 seasons (i8 games and 3 goals in 1914-15 was his best) during which time he occupied every position in the forward line. At Southport all his League appearances were at outside-right. An Exeter sports writer listed his chief assets as 'speed, cleverness on the wing and fine judgment in centering providing many goals for his inside-forwards'. A former surface worker at a colliery, he was a good bowler, finishing runner-up in the famous Talbot Bowling Tournament in Blackpool in 1921. After the Second World War he worked for Dunlops at Atherton as a lift operator. He married late in life and died in Whelley Hospital after a 2 month illness with a liver complaint.

If you can provide any further information please contact me
Season: 1921/1922 [Back to Player Stats]
The player made an appearance in the following games: