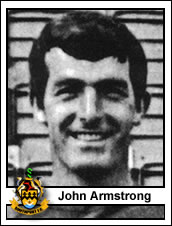 Quick, agile and the possessor of a safe pair of hands, though always slightly suspect to the high crossed ball, he had only a handful of games (but a safe handful!) at Bellshill following his 2 years with Armadale. After 8 months with Barrow — opposing Southport in his last game — he joined Nottingham Forest for g3,000. He made his League debut for Forest in the last game of 1958-59. He got few opportunities there due to the consistency of Peter Grummitt and went to Portsmouth where he enjoyed 4 seasons and 79 League games. He once played at Chelsea in front of 54,588 as they blasted their way back to the First Division by thrashing Pompey 7—o. At Southport he had 2 seasons as deputy to Brian Reeves and a further 2 as first choice 'keeper until finally losing his place to Bobby Wraith following a 4-1 home defeat by Oldham Athletic. He retired with a back injury and became organiser of the Southport F.C. Development Association for a time before taking over as Manager of New Brighton in 1972. A qualified Football Coach he coached the Manchester University team while at Haig Avenue. He settled in Ainsdale and became a representative with Hedges Frozen Foods for 14 years.

If you can provide any further information please contact me
Season: 1969/1970 [Back to Player Stats]
The player made an appearance in the following games: