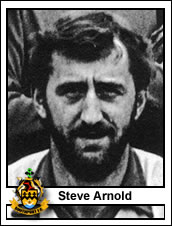 A big, strong player, Arnold spent 3 months on loan at Haig Avenue towards the end of 1971-72, scoring on his debut at Chester. His father originally worked at Vauxhall at Luton and his transfer to Ellesmere Port brought the family north when Steve was 11. Bill Shankly paid Crewe Alexandra Ł10,000 for him when ostensibly looking at Jimmy Hinch (q.v.), whom Steve marked out of a League Cup-tie. His solitary appearance in a Liverpool shirt came in a 2-2 draw at Maine Road. His best spell was in Rochdale's colours as a central defender where 3 7 + 3 of his 69 + 7 appearances were made. After being out of football for a couple of seasons he played for Connah's Quay Nomads and in 1985-86 the Liverpool Football Echo reported him to be with West Kirby where he `figured in their rearguard'. He works as a paint sprayer at Vauxhall's at Ellesmere Port.